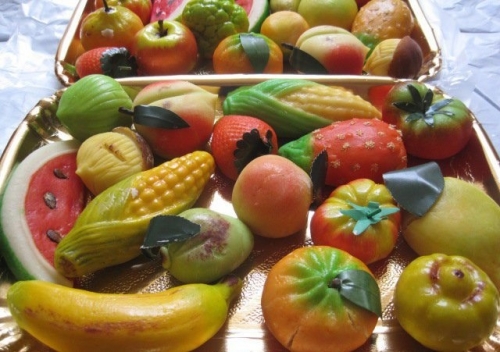 The Sicilian Marzipan, probably best recognized as decorative desserts shaped like fruits, are a well-known tradition in Sicily. Pastry shops in Taormina and Palermo display these almost-too-good-to-eat sweets in their windows and passersby like me stop and gaze in amazement. Known as frutta di Martorana, these life-like fruits appear real, but are made of marzipan.

Marzipan is an almond paste known as pasta reale, (pasta, meaning "paste") and is made with ground almonds, sugar, corn syrup, and lemon juice. This confection has a consistency which makes it easy to mold into different shapes. Most of the marzipan specialties look too good to eat, but are, of course, completely edible.

The most commonly accepted story behind the Sicilian marzipan tradition begins in Palermo at the Convent of the Martorana. As a prank on the Archbishop's Easter visit, the nuns created dozens of marzipan fruits and painted them to appear like real fruit. Then they strung these from trees in the cloister garden, and the Archbishop believed that the trees had a miraculous fruit-bearing season.

This convent was, at one time, a part of the Chiesa di Santa Maria dell'Ammiraglio. Mother Superior Eloisa Martorana, founded this Benedictine convent in 1194, and so the convent was named in her honor. The convent no longer exists but the Arab-Norman style church is fondly known as La Martorana, and is world-famous for its stunning mosaics. On a recent trip to Palermo, I was able to visit La Martorana just in time for a beautiful wedding.

Sicilian traditions around Martorana are very strong, particularly on All Souls' Day, or I Morti, November 2nd. Sicilian children find baskets containing frutta di Martorana when they arise on that day, and they are told that the marzipan fruit has been left by their long-gone ancestors. A festival celebrating I Morti features marzipan, which is now commonly called martorana, of all shapes and sizes. You can find hand-painted marzipan statues, called pupi di cena, of knights and kings and queens, along with Spider-Man, Smurfs, and Donald duck characters.

Although much of this is done by hand, some of the Martorana is made using molds, but the painting is still done manually. This labor-intensive art takes three days on average, with the first day making the marzipan after blanching, peeling, and grinding the almonds. They are then formed into shapes and placed on drying racks. Day 2 consists of painting the martorana with liquid food coloring diluted in water or vodka. Very interesting! They must dry again until day three. The third day the martorana are glazed with diluted powdered gum Arabic and allowed to dry. These can be stored for three months in airtight containers.

On your next trip to Sicily, treat yourself to some frutta di Martorana and you will never forget its taste and texture. This is the real Sicily.

Tweet
More in this category: « How to make the perfect risotto The Feast of the Seven Fishes »