Luca Madonia - Aesthetically and Thoughtfully Expressing His Emotions Through Music 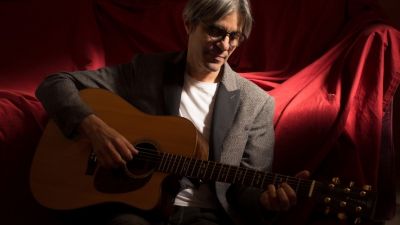 For one to successfully undertake and maintain a vocation, clear vision and diligence to objectives are requisite. These are individuals who seldom rest on their laurels but rather identify and pursue new opportunities as they evolve and adapt according to the challenge. Italian singer/songwriter and poly-instrumentalist Luca Madonia is a gifted artist who has had a lengthy professional career, all the while remaining a humble and respected figure on the Italian music horizon. He was born in Catania, Sicily on June 4, 1957. His passion for music began at age eight and was fueled by the popular sixties music radio program “Bandiera Gialla” (Yellow Flag) featuring legendary hosts Renzo Arbore and Gianni Boncompagni. During this time, he was exposed to international recording artists such as the Beatles, Rolling Stones, Beach Boys, and Bob Dylan which in turn sparked an interest in studying the piano at age nine.

Luca’s father was a physician who taught him some basic chords on the guitar and soon the young teenager was laying the important groundwork for what was to come later. Upon entering adulthood, a more mature and determined young man emerged from his shell and he re-dedicated himself to his musical career. Luca began composing and recording his first songs in the studios of Catania and later set off for Milan, the Italian “Mecca of Music,” with his demo tapes and high hopes of attracting the attention of a record label.

A promising audition with legendary producer Alberto Salerno of Ariston Records failed to yield a recording contract. Unperturbed by this initial rejection, he joined a pickup band performing covers of American folk-rock bands and sharpened his vocal skills. He attempted to follow in his father’s footsteps by pursuing a professional medical degree but became disillusioned and found his interest in music also starting to wane as the bourgeois and provincial mindset in Catania failed to challenge the intellectually adept, burgeoning musician.

In 1982, alongside his brother Gabriele, a talented drummer, the duo sought out local, like-minded artists and met aspiring vocalist/guitarist Mario Venuti and bassist Toni Carbone. The quartet developed an instant relationship that fostered a creative synergy they had been lacking singularly and christened themselves as “Denovo.” They gained a popularity that extended well beyond the borders of the island reaching deep into the Italian mainland. The group displayed a sound that fused melodic Mediterranean rhythms with British pop-rock sonorities and attracted a substantial and loyal following. Overlooked at first by the major record labels, they thrived as an “Indie” alternative rock band with songwriting duties split between Luca and Mario.

Their first album was “Niente insetti su Wilma” (1984) a four-song recording that was released on the “Suono Records” Venice-based independent music label. The album was printed in small quantities and has since become a collector’s item. The next two albums “Unicanisai” (1985) and “Persuasione” (1987) were recorded on the Florence-based Kindergarten independent music label. They gained notoriety throughout the Italian music scene as their songs received airtime on the radio and professionally produced videos were seen on television. The group had achieved a level of success that allowed them to sign a contract with the prestigious PolyGram label. Their next two albums “Così fan tutti” (1988) and “Venuti dalle Madonie a cercar Carbone” (1989) would be their last as a group. The recordings yielded several successful singles and the band toured throughout the peninsula.

At the height of their popularity, principal members Luca and Mario chose to split up the group and pursue their own solo careers. Luca’s first two solo albums “Passioni e manie” (1991) and “Bambolina” (1993) were produced on the Milan-based WEA Italiana music label conglomerate. Although the quality of his songwriting was at an all-time high and his compositions received great critical acclaim, his work was generally overlooked by the public and the media outlets. With declining record sales, his contract with WEA was terminated. He signed on with the RTI Music division of the “Dischi Ricordi” music label. His last recording of the decade “Moto perpetuo” (1994) again failed to garner widespread public acceptance.

After a period of brief reflection, Luca sought a prolonged respite from the rigors of recording and full-time touring. He joined fellow recording artists Carmen Consoli, Mario Venuti, La Crus, and Bluvertigo in a 1996 tribute project called “Battiato non Battiato” that honored legendary Sicilian recording artist Franco Battiato. By popular demand, Luca reunited with his ex-bandmates from Denovo in 1997 to undertake a successful mini-tour throughout Sicily. He also collaborated with several high-profile colleagues including Gianni Morandi, Patty Pravo, Grazia Di Michele, and Andrea Mirò. After his musical hiatus, Luca retuned to the studio, refreshed and motivated to record new material. His first recording of the new millennium and fourth overall, “La consuetudine” (2002) signaled his successful return to the Italian music scene and featured duets with Franco Battiato, Mario Venuti and Carmen Consoli. His good fortune continued with his fifth studio album “Vulnerabile” (2006) which also featured the hit single “Quello che non so di te,” another duet with Franco Battiato. The album featured an overall jazzier feel which delighted both fans and critics alike. His sixth solo album “Parole contro parole” (2008) was a greatest hits compilation that featured two new songs, two covers and 13 classics re-recorded. His seventh album “L’alieno” (2011) contained the title track and hit single which he presented at the 2011 Sanremo Music Festival. His last two releases “La monotonia dei giorni” (2015) and “Il tempo é dalla mia parte” (2017) display some of Luca’s best songwriting and are also among his best-selling recordings. Luca continues his valuable collaborations with long-time colleagues Donatella Finocchiaro and Carmen Consoli on the former and celebrates his 60th birthday and 35th year as a professional recording artist on the latter.