Mbrascatu. A unique musical journey across the ocean and beyond 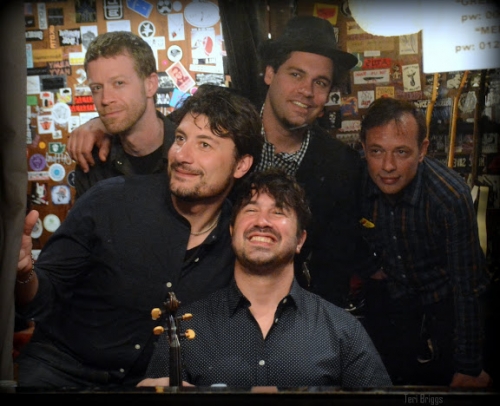 Conventional wisdom states that many of us “want what we don’t have and often have what we don’t want.” While this can serve as an obstacle to achieving our dreams and ambitions, this dilemma can be overcome by wisely “playing the hand that one is dealt.” One individual who adheres to this philosophy is Italian singer/songwriter and guitarist Andrea Algieri. He was born on May 31, 1974 in the comune of Luzzi, nestled in the heart of the province of Cosenza, located in the southern region of Calabria.
A close-knit upbringing within his large but humble Italian surroundings, found him enjoying the company of his extended family, particularly on Sundays and holidays. As was true with most areas of the south, weekend activities, though sparse, were usually brightened by the sounds of song and music permeating throughout the household. Andrea’s uncle Umile and cousin Tonino were particularly adept at creating a cheerful atmosphere with their musical talents. This served as the impetus for his decision to devote his time and efforts to developing his own personal musical skills.

Andrea received his first guitar from his grandfather; a hard-working cobbler and who just happened to be nicknamed “Mbrascatu,” a Calabrian word for “dirty face.” The love affair between the young man and his instrument did not take the classic formal education at the conservatory route, but instead evolved due to his innate ability to play by ear. By age 14, the urge to take his abilities to the next level saw Andrea forming a band with his friends and launching the fledgling outfit, “Moonlovers.” They performed locally and throughout Calabria at festivals and events refining their live stage skills. An opportunity to join into another group two years later led to the formation of “Rossini Target.” The band found themselves in demand in venues that included shows in Rome and in Puglia.

Music suddenly became Andrea’s true vocation and in order to grow, he was compelled to move north to Florence. After a period of studying theatre set design at the Accademia di Belle Arti, he found work abroad in Mexico, on the set of a television soap opera. After one year, Andrea returned home and chose the compulsory 10-month civil service option over military duty and underwent a life-changing experience as he worked in a homeless shelter providing aid to struggling and drug-addicted patients. He also offered support and relief to handicapped children and adults. While music was never very far away, the assignment sharpened his focus and resolve and he soon formed a musical duo with female vocalist Antonella Angelis. They performed together in clubs throughout Florence and, as fate would have it, he encountered an American exchange student, Susan, who was from Ithaca, NY. They fell in love and were soon married; remaining in Florence for seven years until it was mutually decided that employment opportunities for both would be better in the U.S.

The agreed upon choice to open an Italian restaurant, however, never materialized as Andrea’s heart was more inclined to pursue musical endeavors. A last-minute decision for the two of them to return to Italy was interrupted by a phone call from Susan’s sister who had recently relocated to Portland, OR. The idea of moving out west intrigued them both and they agreed there was nothing to lose. The change of scenery was exactly what they had hoped for as the social climate in this mid-sized city was welcoming to strangers; and particularly to burgeoning artists. Andrea was soon meeting other aspiring musicians and performing with them at various open-mic venues and competitions.

His choice to compose and sing his songs in Italian was met with surprising yet resounding acceptance. He was influenced by many musical styles and artists over the years and none more so than Vinicio Capossela; a noted contemporary Italian singer/songwriter who featured a unique and eclectic folk style. On one of his sold-out international tours, which featured stops on the West Coast, including San Francisco, Andrea witnessed first-hand, a memorable performance. Inspired by the response, he chose to develop a similar style and fused together original Italian folk compositions with acoustic rock sonorities. The songs are energetic, catchy and cleverly arranged melodies that appeal to a broad base of listeners. Enlisting the services of Dylan Dean on violin, John Sabestinas on guitars, banjo and ukulele, Mathieu Lewis-Rolland on drums, and Michael Doherty on bass, Andrea christened the group “Mbrascatu.” Their debut recording, “Mbrascatu” (2012), contained 10 original songs and also featured an early photograph of Andrea’s mother, Linda, seated on a scooter. Songs such as “Un gioco,” “Nel silenzio che non parli” and “Cittu za' vecchia” are often requested at their live shows. Their second release “Tempo” (2015) saw some personnel changes featuring Dan Sullivan on bass and Eddy Lalo Esparza on drums. The album retained the diverse stylings present on their first release, but now featured collaborations with and contributions from the other members whose impressive skill set helped evoke a richer, more dynamic sound. “Mille,” “Tempo” and “Lalalarala” were the most popular songs from the recording. The tour in support of the album now featured stops in clubs outside of Portland including California. Founding members Andrea, John and Dylan would welcome Tim Anderson on bass and Mark Powers on drums into the fold. The release of their third album, “Elementi” (2016) was surprisingly completed within a year’s time as the synergy infused by the new members allowed the group to yield their finest work to date. A more mature sound and darker tone permeates throughout the recording and the tunes “Gli sbagli sono umani,” “Bufere,” Elementi,” and “Con le ragioni di chiesa” have already become fan favorites.