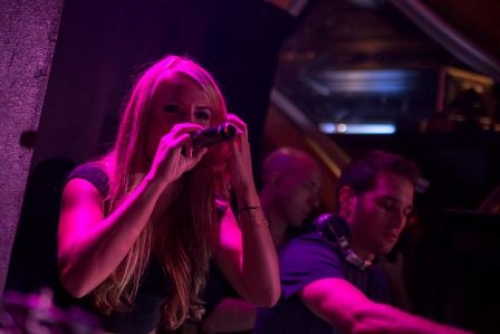 With the rising popularity in electronic dance music, two local Italian artists have teamed up to bring a new sound to Cleveland:

Lauren Lanzaretta, a 34-year-old soul singer/ songwriter got her start writing gospel songs on a family piano at a young age. The Cleveland native found her true passion and sound when she discovered soul music. Lauren just released her debut album, "Naked Soul," available on iTunes or anywhere you can buy or stream music. Lauren was recently crowned "BEST SINGER IN CLEVELAND" by Scene Magazine's Best of Cleveland survey. For more information about her music, please visit www.laurenlanzaretta.com.

Dominic Spitalieri, a.k.a. "Mimo," a 28-year-old DJ/ producer, arrived on the music scene in 2011. The Cleveland native started out as a DJ, playing for friends in his apartment. After some success with shows and some soul searching, Mimo decided to start producing his own music. He recently released his new single, "Waker," featuring Justin David and Mihai Sebastian, available on iTunes or anywhere you can buy or stream music. Mimo was recently crowned "BEST HOUSE DJ" by Scene Magazine's Best of Cleveland survey. For more information about his music, please visit www.MimoEDM.com.

In June 2013, Lauren and Mimo decided to collaborate on a project, and in September 2013, Mimo & Beans released Love Suicide, featuring Lauren Lanzaretta. The track was released as a free download on Mimo's soundcloud page (www.soundcloud.com/dominicspitalieri/lovesuicide). The track was also submitted to Gareth Emery's worldwide demo submission contest to be played on Sirius XM and on Gareth Emery's international weekly podcast. Love Suicide was one of two tracks selected in the contest!

In February 2014, TRU Events, a local promotional company, announced Life in Color with Carnage, Seven Lions and Machine Gun Kelly. Mimo and Lauren were added to the bill as supporting acts along side DONKIS, DJ E-V (96.5 Kiss FM DJ), Dominic Parisi and DJ ADIO. Lauren performed Love Suicide and Lift Me Up, the new single with Kalam Ali, during Mimo & Donkis's DJ set.

Lift Me Up was signed to Sweetdrop Digital's record label, and it will be released as a 5-track EP, to include remixes by several other local artists. The release on July 26, 2014 will be available on iTunes or anywhere you can buy or stream music. A release party is set for Saturday July 26, 2014 where Lauren will perform live during Mimo's DJ set. The event, happening at Liquid (1212 W. 6th Street, Cleveland, Ohio, 44113), will begin at 10:00 p.m.

Be sure to follow Mimo & Lauren Lanzarretta on all social channels to keep up-to-date on each of their solo careers.

Tweet
More in this category: « East side, West side, all around the town... Sonohra »