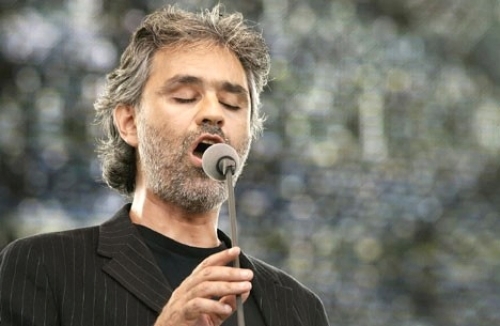 If you ever have the opportunity to see Andrea Bocelli live in concert, buy tickets as soon as they go on sale. Don't wait, because they will sell out quickly. You will not regret your decision - I can guarantee you this from personal experience.

Like many of you, I have watched the PBS special featuring Andrea Bocelli in Portofino, have purchased his CDs and own two of his concert videos, which are wonderful. The best part of having them is that I can watch them again and again.

Four months ago I had the pleasure of seeing him live in concert in Fort Lauderdale. I was thrilled, because he does not play many venues in the U.S. Since I live an hour and a half outside of Ft. Lauderdale, this was perfetto! Of course I listened to his music all week, in the house and in the car, and was psyched when the day finally arrived

All I can say is, what a performance! This 55-year-old, talented tenor was nothing short of amazing! His performances varied from modern popular classic Italian songs like "Con Te Partirò" to operatic pieces. His sweet smile and his ability to engage the audience between songs made the concert even more special.

Lovingly assisting him on and offstage was Veronica Berti, his then-fiancée, who is now his wife. His walking offstage between a few songs, allowing other performers to share the spotlight, demonstrated just how strenuous it was for him to sing at that level. I could have listened all night, and judging by the applause and standing ovations from the crowd, so could everyone else. All ages were there, from teens to octogenarians, a testament to Andrea's universal appeal.

Andrea Bocelli was born with congenital glaucoma, rendering him partially blind. At age 12, he lost his vision completely when he sustained a head injury playing Italian football, known as soccer. Dealing with this challenge all of his life, Andrea pursued his dream of becoming a musician and an opera singer. While studying law at the University of Pisa, Andrea earned money singing in piano bars to fund his singing lessons.

In 1993 he was asked to do a recording for a Milan record label, and this was the beginning of an amazing career for Andrea Bocelli. His professional singing career had begun at the age of 34. Since that time, ee has collaborated and performed with Luciano Pavarotti and Celine Dion, he has sung for the Pope, and he recently serenaded Kim Kardashian and Kanye West at their wedding in Florence.

Andrea Bocelli is easily considered one of the world's most distinguishable voices. This Italian tenor was recently honored with Billboard's Lifetime Achievement Award.

Known as one of the best selling artists in music history, he has sold more than 80 million albums worldwide. This includes fourteen solo studio albums, nine complete operas and three greatest hits albums. He has performed for four U.S. presidents, two popes, the British royal family, and at numerous celebrity weddings, the Olympic Games and the World Cup ceremonies.

Do not miss the chance to experience the wonder of Andrea Bocelli live in concert while you still can. You will not be disappointed.

Tweet
More in this category: « East side, West side, all around the town... Two Local Artists Electrify Cleveland »