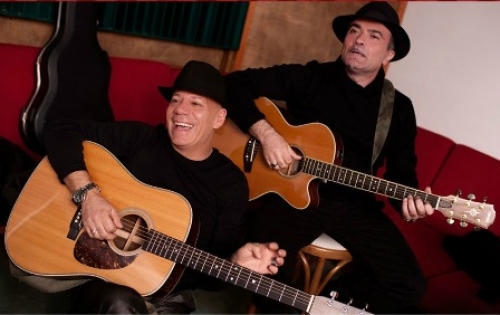 Contemporary Italian music is difficult to categorize into a few simple genres or explain with simple definitions. The Italian music that most people in America usually hear in restaurants, outdoor festivals, indoor dances or concerts is often an incomplete or inaccurate representation of what is actually going on today in the Italian peninsula. To be sure, timeless Neapolitan, operatic, folkloric and instrumental songs have and will continue to endure both there and abroad; but they share the stage and airwaves with the countless hundreds of other styles that are prevalent all throughout Italy.

One genre that is rarely given any mention outside of the country is the rich and diverse sounds of Italian-flavored rock and pop music. Domenico Modugno boldly and perceptively began the musical revolution in Italy with his ground-breaking and internationally-famous classic "Volare." Since then, Italy has never looked back when it comes to this particular musical art form.

Two individuals who have and continue to leave their own mark on the Italian rock scene are from Naples and go by the name of Audio 2. They are comprised of longtime friends, Giovanni (Gianni) Donzelli, born on May 28, 1961 and Vincenzo (Enzo) Leomporro, born July 22, 1961, who have been exposed to myriad musical styles throughout their lives. Their passion for composing captivating and melodic music would not go unnoticed as they were soon in the company of legendary Italian female vocalist Mina Mazzini as contributing songwriters, backup vocalists and studio session musicians. Their songs - "Neve," "Si che non sei tu" and "Raso" - were successfully and elegantly interpreted by the renowned diva, becoming instant hits.

Shortly thereafter, it was decided by Mina's son and producer, Massimiliano Pani, that the duo needed to step out from behind the shadows and into the spotlight. Their debut album, Audio 2 (1993) utilized only a caricature of Albert Einstein on the cover and gave the public no details or insight into its authors. This intentional oversight along with the style of music and vocals contained therein led many to believe that this was a recording by the legendary Lucio Battisti. The singles, "Per una virgola" and "Si che non sei tu" received substantial unanticipated airtime and the album earned platinum certification. Audio 2 received the 1994 Telegatto award as "Il miglior gruppo rivelazione dell'anno" (The Best Group Revelation of the Year) and they continued their collaboration with Mina as they composed the following hit singles "Rotola la vita," "Non c'é più audio," "Non é niente," "Naufragati" and "Metti uno zero." Their second release, E=mc2 (1995) repeated the Einstein caricature cover artwork choosing to deflect the focus from them and instead onto the melodic and lyrical content of the recording. The first single "Alle venti..." became the surprise hit of the summer and the album went on to sell over 200,000 copies, achieving multi-platinum sales.

Their good fortune continued as they were selected by Italian cinematographer Leonardo Pieraccioni to compose the soundtrack of his 1995 film I Laureati. Their third album, Senza riserva, (1996) contained eleven songs, each of which displayed unique sonorities and earned gold status. The first single, "é tutto più grande," became an immediate hit and reflected an evolution in their songwriting skills. The song would also be included in the 1996 Pieraccioni film Il Ciclone. Audio 2 was bestowed with the 1997 "Premio Rino Gaetano - Migliori Autori" (Rino Gaetano Award - Best Authors). This accolade is named in honor of the late legendary and mercurial Italian singer/songwriter which recognizes excellence in musical composition.

Gianni and Enzo sought a brief respite from recording and touring, choosing to instead resume collaborating and composing for others, and did so by contributing to the 1998 blockbuster release Mina Celentano which would go on to sell an incredible 1.8 million copies worldwide as they re-arranged the hit singles "Acqua e sale," "Specchi riflessi" and "Io ho te." They eventually released their first greatest hits compilation entitled The Best - Airplay (1998), which finally featured their portraits among the cover artwork and among the sixteen tracks were three unreleased songs "Tu vieni prima di tutto," "Gina" and "Non c'é più audio."

Audio 2 welcomed the new millennium with their fifth album, Audio 2mila (2000) which again achieved gold certification. Their touring schedule expanded to include stops throughout Italy and parts of Europe, including several television appearances. Their sixth release, Sorrisi e canzoni (2002) is a compilation of sorts that gathers together their previous hits written for Mina, re-recorded by them and three previously unreleased songs "Fammi riprovare," "Un fremito costante" and "Sorrisi e canzoni," the last of which displayed Dire Straits-like guitar riffs.

Assuming a more relaxed recording and touring schedule, they would not return to the recording studio until their seventh recording Acquatiche Trasparenze (2006) which featured the hit single/video "Zucchero amaro" and was another gold certified release. Audio 2 achieved a life-long ambition by collaborating with legendry Italian lyricist Mogol on their most recent album, MogolAudio2 (2009) which went immediately to the top of the iTunes digital downloads music charts and earned the prestigious "Premio Venice" and "Colori Di Napoli" music awards. The first single, "Prova a immaginare," became an instant hit as the recording was certified gold. Content with the results of the recording, Gianni and Enzo have more recently been seen scouting, promoting and recording with new talent. For more information you can visit their website at www.audio2.it.