San Francesco Del Deserto: How to Escape the Crowds in Venice 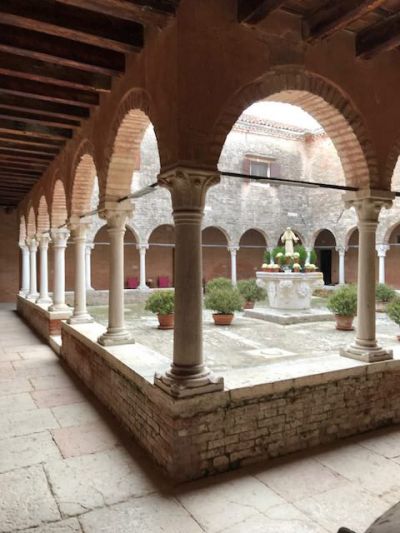 Like many seasoned travellers to Venice, we were frustrated. Keen to escape the Disneyland that Venice has become, we consulted a map showing islands not covered by public transport. San Francesco del Deserto sounded suitably tranquil, so we took up the challenge.

The only building on the island is its monastery, which you should contact beforehand to check that a visit is convenient as only 5 monks now remain there; and they’re a little reluctant to agree to a visit if you don’t speak some Italian. With permission granted, the next phone call is to the boatman, Massimiliano, who will take you from Burano and back for €10.

First inhabited by the Romans, the island was originally named Isola delle due Vigne, but legend tells us that St Francis stopped to pray there with his travel companion (who went by the glorious name of Illuminato da Rieti) on their way back from the 5th Crusade in 1220. Thenceforth it was renamed Isola San Francesco until the 1400s when diseases spread through the swampy lagoon area and the island was abandoned. When the Order of Franciscans returned, it was given its present name to mark its years of isolation.

From the jetty, a short walk along a path bordered by cypresses took us to the monastery where a sign indicated that you should ring the bell. This involved quite a wait. Eventually, a portly youngish monk wearing a knitted hat against the February cold, only sandals on his bare feet, opened the door. Our group was an odd assortment of a pair of bespectacled Italian academics, a couple on a mission from a church in Scarborough, two earnest young hippies from Bergamo, a posse of stout Milanese matrons complete with headscarves and rosary beads, and a couple with a sleepy baby who had been discreetly breastfed in the boat. We were ushered inside and asked if we all understood Italian. Then the challenge began. As four of our number were English, Fra Rosario (as he later introduced himself to me) appointed me as interpreter, a task I was reluctant to undertake. It took such concentration that I hardly had time to look around and take it all in.

The first cloister goes back to the 13th century but lost much of its original charm thanks to Napoleon who removed the alabaster columns. The central well is 15th century and goes down to a source of fresh water, supplemented by rainwater collected in a cistern underneath. The second cloister is private, for the monks’ own use, and very beautiful. As we approached, the monks’ dog, called Tosca, scurried away through the grille.

The church has a campanile but no bell: that rascal Napoleon again. He used the melted down bronze for canon, but when the Church of Santa Lucia was demolished by Mussolini to make way for Venice’s station, they sent their bell to San Francesco del Deserto. It stands in the cloister.

Napoleon did further damage by using the church as an arsenal, making an additional floor above the nave for storing gunpowder. The soldiers slept in the choir.

There are fragments of the earlier church floor to be seen through glass in places, but it has been much altered over the centuries. Translating the next bit wasn’t helped by the Professore who felt it necessary to show off his limited English by whispering extra information into my left ear whilst I absorbed Fra Rosario’s details on my right.

The side chapels are of particular interest. The first contains the tomb of Fra Bernadino, once the head of the order, who led the monks back to the island after Napoleon withdrew. He is in the process of beatification, with one miracle established; the curing of cancer in a child through her mother’s prayers.

Another chapel holds a semi-fossilised tree trunk claimed to have grown from a branch planted by St. Francis when he arrived on the island. Chemists at Padua University have certified that it is the correct age.

The Oratory of St Francis comprises a narrow cell with a grille and a life-size figure of St. Francis in prayer depicting the moment when he reached the island.

Outside, the noisy birdsong in the gardens appropriately reminds visitors of another miracle. When St. Francis arrived, his companion knelt in a prayer of thanksgiving, but couldn’t concentrate because of the loud singing of the birds. St. Francis remonstrated with them and they were silent until the prayers were over. This story is told on a stone tablet outside the church. Next to this tablet, and indeed throughout the monastery, is the symbol of the Franciscan Order, two crossed arms. One arm belongs to Christ and the other in a sleeve belongs to St. Francis. Both have stigmata.

The walk around the gardens is beautiful, especially on the western side with views across to Burano and Torcello. We wandered along taking photos and sitting on benches enjoying the views. After all, when we’d asked Massimiliano what time we should return to his boat, he said he didn’t know. “You stay as long as it takes,” he said.

Fra Rosario told us in a conspiratorial tone, tapping his nose, that the monks also have an orto, a kitchen garden, but visitors can’t see it. I asked why. Was it too overgrown perhaps? Just the contrary, was his reply, but we’ll never know. They certainly have a lot of hard work just to keep the place going. In addition to the maintenance, cleaning and gardening, between prayers, of course, they also take in guests who are on retreat and do some teaching too. Charitable work occasionally takes them away from the island, but not for long.

We shook hands, finally, in the presbytery where a few books and cards are on sale. Tourists are hardly likely to flock here looking for souvenirs, but that’s not the point. Whether you’re a believer or not, the island has an overwhelmingly spiritual atmosphere and we all strolled back to the boat feeling in some way blessed by the experience.

This article first appeared in Italy Magazine. Myra’s amusing book, “The Best Mud in Italy,” is about living in the Veneto and is available on Amazon Kindle.

Tweet
More in this category: « The Singing Washerwomen of Tuscia Unveiling the Jewels of Casa Rocca Piccola »