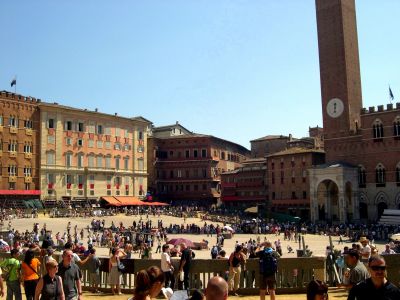 La piazza (the square) has been the center of town since the Romans and the Greeks before them. The ancient Italian villages were built traditionally around a main square where most activities took place such as the daily market, most political discussions and all the executions of criminals and the enemies of the local powers. It is also where people gathered throughout the day to chat and socialize.

The illustrious artistic and architectural traditions developed in Italy since its early days have created spectacular piazza; not only in cities such as Rome, Venice and Siena, but also in most smaller towns and villages, all worth a visit given their uniqueness and beauty. Who has ever missed Piazza St. Peter or Piazza Navona or Piazza di Spagna (figs. 1-3) on their last trip to Rome? And what about Piazza St. Mark in Venice (fig. 4) or Piazza del Palio in Siena (fig. 5)? Spoleto, in Umbria, is a wonderful medieval town, very rich in artistic and musical tradition with a small but very elegant and welcoming Piazza (fig. 6), frequently the shooting location of movies and documentaries. The Amalfi Coast, with its many splendid villages such as Positano, is constantly visited by tourists from all over the world. The towns’ seaside piazzette (fig. 7) are constantly busy with people looking for souvenirs, a cold drink or a gelato. Piazza del Popolo in Rome is always filled with traffic and people, however it is most pleasant to stroll around at times such as the yearly Carnevale festivities (fig. 8) when automobiles are forbidden, allowing children of all ages to spend the day showing off their costumes. Most squares can also quickly become a soccer field for local children (fig. 9) and nothing is better than an aperitivo al fresco before lunch (fig. 10). Italians, as we know, love talking and there is no better place than the piazza (fig. 11) to meet friends to talk for hours about politics or soccer. The annual celebrations most cities and borghi organize, often in honor of their Saint, are always centered in the town square, where everyone will congregate to enjoy the Festa (fig. 12) along with the best of the local culinary traditions accompanied, of course, by plenty of vino e dolci!

But, when the night finally arrives, the paesi return to their quiet (fig. 13), since life is usually lived at a much slower pace around there. Buona notte!