Il Volo: Then and Now 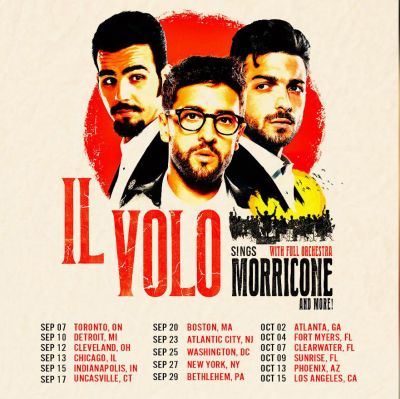 As Il Volo continues their 2022 European Tour and their North American Tour begins this fall, we thought it would be fun to look back on an article originally printed in August 2011 and written by the late Paul Sciria. Eleven years ago, these gentlemen were just teenagers. We wonder if they knew just how successful they would become over the next decade (plus) of their career.

"Volare" means "to fly." Italian singer Domenico Modugno soared to new heights with his recording of the song “Volare,” and Dean Martin took the lyrics into the stratosphere with his own rendition. Also skyrocketing to futuristic heights of rhythmical imagination are three Italian young tenors. They call themselves "Il Volo" which means "the flight."

It is unbelievable that three teenagers, Piero Barone from Agrigento, Sicily, Ignazio Boschetto from Bologna and Gianluca Ginoble from Abruzzi, have so quickly catapulted into a worldwide phenomenon. Two years ago, their careers began on television when they won a competition on Italy's popular talent show "Ti lascio una canzone" (I'll Leave You a Song).

Like a bolt of lightning, Michele Torpedine, who helped launch the musical careers of Zucchero (Sugar) and Andrea Bocelli (Time to Say Goodbye), recognized the talent and together with legendary promoter Tony Renis and American producer Humberto Gatica helped Il Volo launch. There has been no stopping since the trio introduced their first album this past spring, "Il Volo." Their debut album and pop version of "O Sole Mio" have scorched the industry leading to a whirlwind of events touring America and television appearances (American Idol, Ellen DeGeneres Show) and most recently the release of their latest album in Spanish and platinum record celebrations back in Italy.

Apart from their singing abilities, engaging humility and incredibly busy lives, the teenagers lead normal lives outside of music. In downtime, 16-year-old Gianluca is a major fan of soccer and a World Cup enthusiast. He has also had the opportunity to meet some of the top celebs of the sport.

Piero is the oldest of the trio. He is a race car buff and knows the Ferrari history of tradition and success. Admittedly he is not a roadrunner. He has never climbed into or taken a Formula One for a spin.

Ignazio's adoration meshes with IL Volo - the flight. He cherishes airplanes and he looks forward to more flights as the three Italian talented teenagers soar from venue to venue.

Since this article was published, Il Volo has captured worldwide success. Latin Grammy nominations, touring with Barbra Streisand, performing multiple times at Radio City Music Hall and other world-famous venues, awards upon awards, successful album releases and a book release, PBS specials, sold out tours around the world, and more. In 2019, Il Volo celebrated 10 years kicking it off by winning third place at the 69th Sanremo Music Festival, followed by the release of their fifth studio album. Their compilation album “Il Volo: The Best of 10 Years” also celebrated this milestone anniversary. The pandemic allowed the group to concentrate on a new project, working on the repertoire of Ennio Morricone and performing a tribute last June. Now, their European and North American tour continues. We are excited to see what the next 10 years brings this cherished trio.

View the embedded image gallery online at:
https://www.lagazzettaitaliana.com/people/9967-il-volo-then-and-now#sigProIdaf23711b57
Tweet
More in this category: « On the Cover: Lo Scoppio del Carro A Look Back: A Traditional Wedding in Veneto »