On the Cover: Serralunga d'Alba 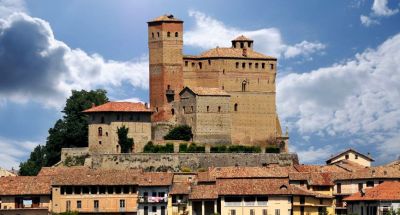 The medieval village of Serralunga d'Alba in the Italian province of Cuneo in the Piedmont region may only be home to around 500 residents, but sitting atop the hills of the Langhe, the small town has much to offer.

The Langhe was inscribed in 2014 as a UNESCO World Heritage Site, with its cultural landscapes and outstanding living testimony to winegrowing and winemaking traditions. Nestled within this area are vineyards producing some of the best wines in the world such as Barolo and Barbaresco and farms providing the world-famous white truffles of Alba and many fine cheeses.

Perhaps the most notable site within the village is the slender and majestic Castle of Serralunga d'Alba. The castle overshadows one of the most beautiful and historically intact villages of the Langhe, surrounded by the rolling hills of Barolo vineyards. Considered to be one of the best-conserved examples of 14th century noble castles in Piedmont, this castle represents a unique piece of history in Italy with an architectural structure of a French donjon.

The castle's construction was carried out between 1340 (the year in which the Falletti family received its estate as recompense for military involvement) and 1357. This information is gleaned from documents that register a sale carried out in one of the castle rooms. The fact that it was never the object of military importance, nor was it structurally transformed over the centuries has kept this castle unaltered. Its medieval fortress is, in fact, the original structure.

Instead of military use, this castle was used throughout the centuries as a point of control over the production activities in the territory, as evidenced by its imposing, vertical stance that was intended to emphasize the prestige of the Falletti family. At the end of the 1300s, the castle was complete with its palacium, the long and compact principal building, and large rooms superimposed upon one another for delegation duties and living space. Its large cylindrical tower was also already constructed, as was the rooftop that affords an incredible view today but was primarily a status symbol at the time. The courtyard at its quadrangular base is characterized by a drawbridge.

From the windows of the third floor, visitors can admire the spectacular view of the Langhe from its vineyard-covered hills to the snow-topped Alps, a panoramic scene that is especially breathtaking on clear days.

The castle has been the property of the State since 1949 by its purchase by the Opera Pia Barolo, the institution created by Juliette Colbert, the wife of Carlo Tancredi and the last Marchesa of the Falletti family of Barolo (better known as Giulia). Between the end of the 1800s and the beginning of the 1900s, it seems that the care of the castle on the part of Opera Pia was of less concern than the castle's more productive use: for many years, the rooms of the castle were used as storage for agricultural products. Immediately after WWII, the castle was purchased by the State, and remains its property today under the Superintendence for Architectural and Landscape Heritage in Piedmont.