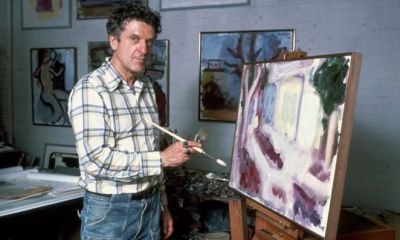 In 1897, Robert De Niro, Sr.’s father, Henry Martin De Niro, was born in Ferrazzano in the province of Campobasso, in the region of Molise, Italy. Henry’s parents, Giovanni Di Niro and Angelina Mercurio had emigrated from Ferrazzano to Syracuse, New York ten years earlier. In Syracuse, Henry met the Irish American Helen O’Reilly. They married and started a family.

The painter Robert De Niro, Sr. was born in Syracuse on May 3, 1922. De Niro was raised in the city and as a young boy displayed a natural talent for drawing. Given his advanced skills, he was soon enrolled in adult art classes at the Syracuse Museum of Art.

By 1939, the 17-year-old artist was studying with the German emigre painter Hans Hofmann (1880-1966) at his summer school in Provincetown, MA. From there he received a scholarship to the Black Mountain College in Asheville, North Carolina where two other noted German emigre artists, Josef (1888-1976) and Anni (1899-1994) Albers were teaching. De Niro had his first one-man show in 1946 at Peggy Guggenheim's gallery, Art of This Century, in New York City.

Added to this synthesis of American avant-garde painting and European modernism was the close working relationship De Niro had with lesser-known American painters such as Leland Bell (1922-1991), Paul Resika (b.1928), and Albert Kresch (b.1922). These talented New York artists embraced expressive abstraction but soon came to follow a separate path between the painterly and abstract, and the continuing relevance of naturalism and figuration.

De Niro’s career was marked by both personal and professional demons. In 1942 he married the talented painter Virginia Admiral (1915-2000). The couple had a son in 1943 (the actor Robert De Niro, Jr.) but separated soon after. They divorced in 1945. The responsibilities of providing for his family and growing concerns about his sexuality deeply affected the artist.

On the professional level were doubts about his talent and the need to establish his own place within the competitive and commercial art world of New York galleries. To complicate matters, a large portion of De Niro’s work was destroyed in a studio fire in 1949.

In De Niro’s finest work, he successfully negotiates the path between European modernism and post-war American painting. His canvases display lush surfaces rich in color and activated by expressive brushwork. At the same time, his commitment to the elegance of line and the continuing relevance of traditional subject matter including nudes, portraits, still lifes, and landscapes, reasserts his art historical pedigree.

With the advent of Pop Art, Hard Edge painting, and the conceptually driven works of Robert Rauschenberg and Jasper Johns, De Niro’s art was viewed against the never-ending cycle of art historical disruption and change. His personal vision, however, remained true to the artistic journey he had begun 50 years earlier. Robert De Niro, Sr. died on his 71st birthday, May 3, 1993, at his home in Manhattan.

In recent years, Robert De Niro, Jr. has been active in preserving his father’s artistic legacy. In 2014, he supported and was interviewed for the HBO film documentary Remembering the Artist: Robert De Niro, Sr. In 2019, he wrote the introduction to the first comprehensive monograph about his father Robert De Niro, Sr.: “Paintings, Drawings, and Writings: 1942-1993” with essays by Robert Storr, Charles Stuckey, Robert Kushner, and Susan Davidson. The younger De Niro has preserved his father’s Soho studio in its original state. He has also made every effort to have his father’s art seen and experienced in museums, galleries, and a variety of other public venues.

View the embedded image gallery online at:
https://www.lagazzettaitaliana.com/people/9722-the-personal-journey-of-robert-de-niro-sr-1922-1993#sigProIddb7ac1f2f1
Tweet
More in this category: « A Look Back: Gratitude For My Heritage On the Cover: Festa della Repubblica »