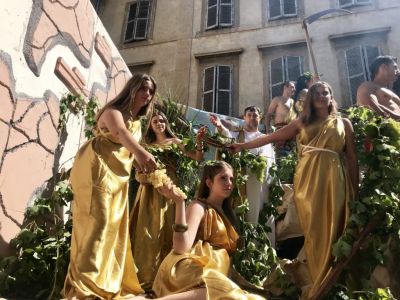 Bolsena, Italy is a town in northern Lazio on the eastern shore of Lake Bolsena. The comune is known for a miracle said to have occurred in the Basilica of Santa Cristina in 1263 when a Bohemian priest reported bleeding from the Host he had consecrated at Mass. A framed fresco by Raphael and his school in the Vatican Stanze depicts the event.

Arriving in Bolsena at the end of July, visitors witness locals gathering together in front of the 14th-century castle across the road from the San Salvatore church where a Mass celebrating Santa Cristina had just concluded. Martyred in the 4th century and patron saint of the town, Saint Cristina inspires an annual sagra or festival.

Five misteri – or scenes of her martyrdom tortures – are presented during the vigil of her Feast. The final five scenes, concluding with her Glorificazione (her ascent into Heaven) are acted out the day of her feast, July 24th.

A handful of men and women wander the Feast Day celebration wearing short-sleeved blue shirts with a Santa Cristina image on the pocket, all proud portatori (bearers) of the sacred statue of Santa Cristina. After Mass, bells toll and fireworks zip and hiss over the castello. The Misteri follow shortly after.

A blue curtain covering the stage draws back and the figures of the day’s first martyrdom scene, la ruota (“the wheel”) unfold. People in Roman dress – some expressing regal pride, others pain and devotion – act out the scene in silent diorama. The entire scene is over in just minutes.

The band plays and all observers turn towards the San Salvatore church across the road, anticipating the exit of their beloved Santa as the portatori proudly heft her aloft.

Bolsena’s beloved Santa Cristina follows the Bishop of Orvieto bearing a venerated relic of Santa Cristina and flanked by prelates in the procession winding through the labyrinthine medieval alleyways of the lakeside town.

The procession ends at the site of the second Mistero. In this attempt by a serparo (“snake charmer”) to set poisonous snakes on Santa Cristina, he himself is bitten but the young Saint’s prayers save his life.

Then, on to the third miracle, the cutting off of Santa Cristina’s tongue, ordered so that the 11-year-old child, recently converted to Christianity, could no longer pray. Lovely young woman in rich gold feasting on grapes grace the stage.

Following the conclusion of the Misteri, a solemn High Mass takes place in the Basilica, officiated by the Bishop of Orvieto who is flanked by many prelates in brilliant red robes. The color of martyrdom. The color of celebration.