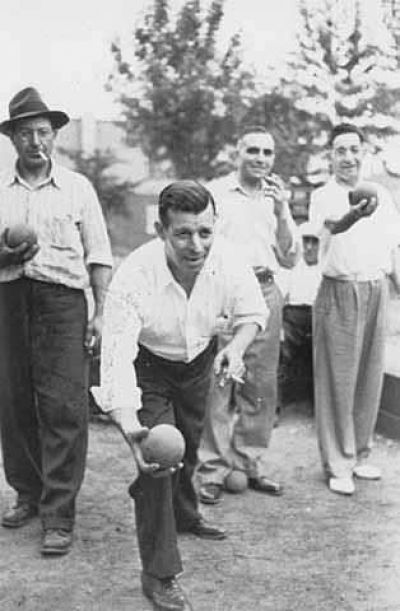 Throwing balls toward a target is the oldest game known to mankind. From hockey dating back to 600 B.C. to evidence of Polo being played in the 4th century in the Sassanid Dynasty to perhaps the oldest soccer-like ball sport recorded, cuju, which dates to around the 3rd century B.C. in China, ball sports have entertained the masses for what seems like forever. It is no surprise, then, that Italians have also left their mark on historical ball sports with the ever-popular sport of Bocce.

Bocce, in its current form, was said to be played by Roman soldiers during the Punic Wars against Carthage in 264 B.C. Teams of soldiers would throw a small “leader” stone then subsequently toss larger stones near the leader. The closest stone to the leader would score. The game was said to relax the soldiers during times of war. The actual birthdate of Bocce is unknown. Stone balls dated to 9000 B.C. were found in Turkey while some say that Bocce came from Egypt in 5200 B.C. Still others claim that Greece was where the sport originated near 600 B.C. Regardless, Bocce remains a worldwide sport played by people of all walks of life.

Because of its close association with the Romans, Italians easily claim the sport as their own.

In 1319 A.D., Bocce Ball was prohibited to people of lesser nobility because it was felt that the game diverted attention from more important tasks like archery and war training. It became a public game in 1519. It is said that Greek colonists brought the sport with them to what is now modern Italy. It was Giussepi Garibaldi who, while unifying and nationalizing Italy, popularized the sport as it is known today. The first Bocce Olympiad was held in Athens, Greece in 1896 and has remained a part of international sports ever since.

In the U.S., Bocce is becoming more and more widespread. Since it swept California in 1989, its popularity has been on the rise. Today, there are more than 25 million Bocce enthusiasts in the U.S., playing both recreationally and competitively.

Because the rules of Bocce are simple, family members of all ages can enjoy it together. Recreational centers, parks, bars, country clubs, and even private residences boast their own indoor and outdoor Bocce courts making the sport very accessible to everyone.

If you haven’t experienced the fun of Bocce, now is the time to try it. Grab some family or friends, find a court and enjoy this must-do activity. You just may find that Italy’s favorite pastime is your family’s too.

View the embedded image gallery online at:
https://www.lagazzettaitaliana.com/people/9163-must-go-play-bocce#sigProIdf36381515b
Tweet
More in this category: « August Birthdays The Rise of Coaching in Italy with Sonja Caramagno »