Great ladies of the stage and screen 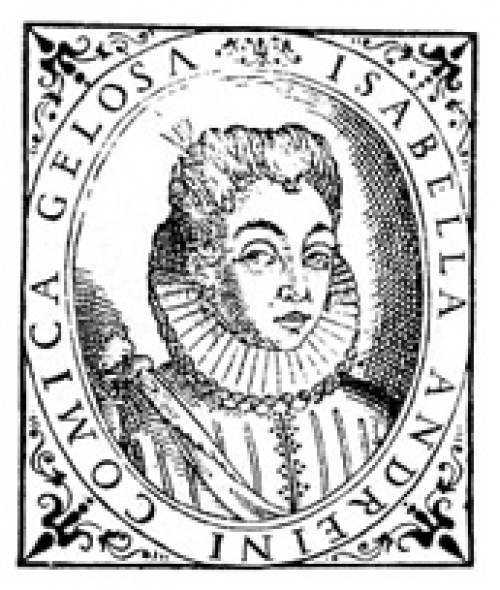 Italian female entertainers of the late twentieth and early twenty-first centuries are well known by modern generations throughout the world, but -- to many -- some of the most famous of earlier times are virtually unknown.

The prima donna innamorata is the leading female romantic character of commedia dell’arte, a popular form of entertainment in the mid-sixteenth century. Born on the Italian stage, this type of performance has a clearly defined story, but depends on the skills of each actor to use improvisation in portraying a role. One of the most popular names for this character is Isabella in honor of Isabella Andreini (1562-1604), who defined the role by giving the character elegance, common sense and confidence.

Isabella began her work on the stage at 14 years old, and two years later, married fellow actor Francesco Andreini. Throughout their careers, she and her husband appeared onstage as the leading romantic characters, and traveled with an acting troupe to France several times. She was also well known for her plays, poems and other literary works that focused on strong female characters. Isabella died during the birth of her eighth child, but her written works and her acting greatly contributed to the world of art.

Marie Taglioni (1804-1884) trained for many years as a ballerina, but when her instructor claimed she was better suited for another field of work, Marie’s father Filippo, a choreographer, decided he would train her. After one year of intensive training, Marie debuted in Vienna in 1822 to good reviews. She continued to dance and train with her father and in 1827, Marie premiered at the Paris Opera House.

In 1832, Marie danced as the sylph in La Sylphide, a ballet choreographed for her by her father. The ballet brought greater attention to romanticism in dance, and Marie is credited for bringing dancing en pointe (on the toes) to the stage. She also raised the length of her dress to show her feet as she danced, causing ballet skirts to be made shorter. Marie toured for many years to critical acclaim in London, Paris, and Russia. In 1847, she performed her last ballet and later taught social dance and ballet.

Known as the leading female character in classic tragedies, Adelaide Ristori (1822-1906, pictured left) started her stage career at twelve years old. By fifteen, she was offered parts as a leading lady, and although -- at her father’s insistence -- she was playing lesser roles, within a few years, Adelaide was back to portraying leading female characters. She studied under several coaches, and took great care to understand the motivation of each character in order to provide a realistic interpretation on stage.

Adelaide’s performances as the tragic heroine were so well received, she gained notoriety for her roles as Francesca di Rimini, Mary Stewart, Queen Elizabeth and Lady Macbeth. She also played the Greek mythical roles of Medea, Myrrha and Phaedra. Adelaide performed on stage in London, Paris and Spain; and traveled four times across the Atlantic to perform at the Lyceum Theatre in New York City.

The leading lady of the Italian stage and an inspiration to authors, poets, playwrights and other performers, Eleonora Duse (1858-1924, pictured right) was admired for her ability to portray the emotions of her characters. She used her experiences in life as the basis for understanding a character’s personality and in doing so, created the modern style of acting.

The daughter and granddaughter of actors, Eleonora was very young when she began her stage career touring with her family throughout Europe. By her early twenties, she had toured South America and became manager and director of her own acting company. In 1896, she toured in America and was given a tea in her honor by President Grover Cleveland’s wife. In 1923, Eleonora was the first woman -- and first Italian -- to be featured on the cover of TIME magazine.

One of the first leading ladies of the silent screen and one of the most popular silent film stars worldwide, Francesca Bertini (1881*-1985, pictured left) performed onstage as a child and then moved to film in the early years of film production. Francesca is credited with bringing realism to the screen by removing the sweeping mannerisms that exaggerated a character’s performance, and by using facial expressions or lack of expression to express a character’s emotions.

In the early 1900s, Francesca starred in numerous films before appearing as the lead in Assunta Spina (1915), a film she co-wrote and co-directed. Shortly after, she started her own production company, and -- in all -- starred in almost 150 films. *Francesca’s birth date is sometimes listed as 1888 and 1892.

Another popular silent screen star, Lyda Borelli (1884-1959) was so idolized by Italian teenage girls the term Borellismo was used to describe the craze. Lyda was adept as using her body to form unusual but interesting poses that added depth to the characters she portrayed. She also believed that the use of fashion and fabric played an important part in setting the tone of the character.

Most of Lyda’s characters had dark secrets that added mysticism to her roles. One example is her portrayal of Alba in Rapsodia Satanica (1915). In the film, Lyda portrays an old woman who made a deal with the devil to give up romance so she can be young and beautiful forever.

These leading ladies of another era may not be as well known as modern day entertainers, but each has left a legacy that has influenced the entertainment industry.

Janice Therese Mancuso is the author of Con Amore, a culinary novel; and founder of Thirty-One Days of Italians, an educational program to promote Italian and Italian American history, culture, and heritage. For more information, visit http://home.earthlink.net/~31italians, www.jtmancuso.com or email Janice at This email address is being protected from spambots. You need JavaScript enabled to view it..

View the embedded image gallery online at:
https://www.lagazzettaitaliana.com/people/7601-great-ladies-of-the-stage-and-screen#sigProIdf24e45e325
More in this category: « Valentino, the Last Emperor Maria Montessori - A Pioneer in Education »