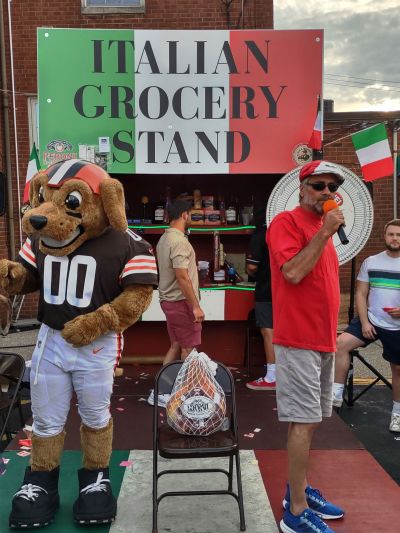 As with all great things, it started with an idea of community and friendships from the past.  Vince Caringi has fond memories of growing up at Our Lady of Mount Carmel West. It was where he went to school, church and made some great lifelong friends. He remembers the festivals and the shenanigans with his friends in the schoolyard. His adult life had taken him away from the area for school and other things. When he returned, he realized the festival was not as family and kid friendly focused as it once had been. As he began to get more involved with the festival as a volunteer and understand the ins and outs, the wheels began to turn as to what could be done to bring back the kid-friendly events he loved growing up that helped create those life-long bonds.
Today, Vince and his friends who played on the grounds of OLMC during the Italian festival each year have kids themselves and are hoping they can also forge those friendships and develop a love of their Italian heritage and culture. He thought about the untapped resource during the festival of the soccer field. Knowing that the festival has limited resources he started to explore partnerships for at least one day that could be dedicated to kids, family and culture.
Vince discovered neighborhood Connections and the Neighbor Up grant. Through that he also partnered with Northwest Neighborhoods and received grant money from Capitol Theaters and MyCom. He was lucky enough that his proposal was granted on the first try. Friday night was officially family night at the Italian festival at OLMC.
What could be more Italian than a community-building event on a soccer field watching a movie and eating! Friday night celebrated family, friends, community, church, and everything Vince and his friends had growing up in the neighborhood. OLMC has always been a leader in the community and once again it was the centerpiece for a night a family fun.
Families not only partook in the food and games at the festival, but this additional family and community focused event that was partnered with community groups brought additional food, games and some special guests for the families and kids. Additionally, the families sat on the lawn and watched the movie “Luca” which is set on the Italian Riviera and talks about finding who you are and not letting your fears stop you from exploring. This is much like our immigrant ancestors who left what they knew for the freedom of the U.S. Many of them shed their past for this future life and rebuilt in a new, unknown place that they maybe only saw a glimpse of on the surface. They relied on others like them and had to trust on those around them.
Hopefully more events like this can be held to bring our Italian community together. All it takes is a spark of an idea and a little groundwork from people like Vince. This is the Italian way; ideas and innovation!