Make it a Movie (Part II) 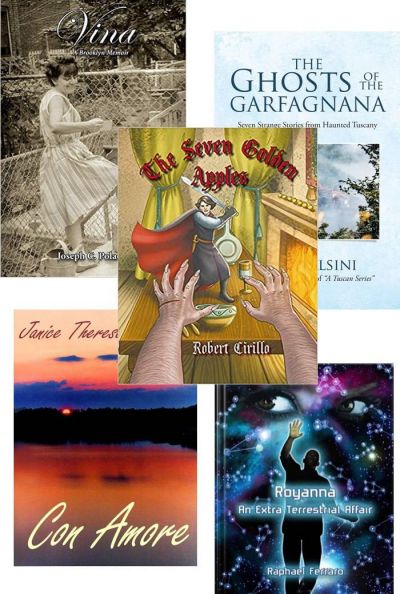 Italian American history is fascinating, but little is taught about the path Italian immigrants traveled as they became Italian Americans. By the mid-18th century, Italian traditions were blending into the culture of America, slowly becoming engrained in a burgeoning American society.

Few films have been made with a positive focus on Italian American culture; possibly due to a shortage of suitable material presented to filmmakers. Books by authors of Italian heritage fill the web pages of the Italian American Press, offering a variety of informative and entertaining stories covering all aspects of life experienced by Italian immigrants and their Italian American descendents.

While these stories deal with human emotions, the characters are not extreme examples of sentiment or insensitivity and do not fall into the media’s typical representation of Italians and Italian Americans. For producers and audiences in support of quality stories about Italian American life, the books below offer worldwide entertainment with an Italian American flair. In keeping with today’s standards of cultural awareness and appropriate representation, roles would be portrayed by actors and actresses of Italian heritage. Some suggestions are noted.

“The Ghosts of the Garfagnana: Seven Strange Stories from Haunted Tuscany”

An Italian American journalist with ancestral heritage in Tuscany, Paul Salsini has written a series of novels based on his numerous trips to the region. He compiled his research, combining the supernatural with the history and people of the Garfagnana, to develop a collection of stories comparable with “The Twilight Zone.” Each story focuses on a specific era in time, starting at a monastery in 1225 and ending in the present, with a theater student from America traveling to the region in search of ghosts. An ensemble cast with narration by Al Pacino.

Born in Italy and raised in America (arriving when he was 2-years-old), Raphael Ferraro, founder of the Italian American Press, became an educator of numerous disciplines while maintaining an interest in spiritual healing and extraterrestrial events. After his retirement, he published “Royanna,” a story about alien civilizations, religious philosophies, and mythology, where college professor and science fiction lecturer Dr. Stephen Drago follows a course of events leading him to the mysterious and powerful Royanna. Jon Bon Jovi as Stephen Drago and Lady GaGa as Royanna.

An original Calabrian folktale told by Robert Cirillo’s great-grandfather motivated the author to turn the oral fable into a richly illustrated book. In an ancient land, the disappearance of the village’s symbolic apples leads a member of the Royal Family on a dangerous journey to find them. A classic story of faith and perseverance evokes the cinematic themes of “Avatar,” “Harry Potter” and “Lord of the Rings.” An ensemble cast with narration by Robert DiNero.

In 2016, Professor Emeritus of Biochemistry Joseph Polacco published a collection of stories, ranging from the mid-20th century to the beginning of the 21st century, in tribute to his mother and his hometown of Brooklyn. In an Italian American version of “I Remember Mama,” the author and a cast of colorful characters of divergent backgrounds and ethnicities share their memories of Vina, showcasing a woman of strength, humor and compassion. Isabella Rossellini as Vina.

Set in a seaside resort on Long Island, the history of Italian food is the focus of a competition among seven Italian chefs to find the next great chef and leader of the Italian American Food Council. As the chefs prepare recipes (included), personalities clash and a puzzling turn of events leads to a rekindled romance and a reunited family. Carla Gugino as Janine Fiori.

Learn more about these wonderful books, and so many others, on the Italian American Press at www.italianamericanpress.com.