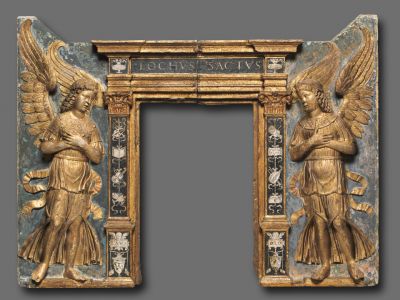 Displayed in the Renaissance galleries of the Cleveland Museum of Art is a marble, frame-like, relief sculpture, Italian in origin, depicting two angels facing a central opening or portal. It dates to about 1480 to 1500. The marble is beautifully colored in dark blue paint with gilded highlights and measures 32 inches in height. While the beauty of this object is not in doubt, we might inquire as to its original function. What was the purpose of the central opening to which the two exquisitely carved angels face in adoration? Very often works of art displayed in today’s museums, that once served a specific purpose, are now obscured by the passage of time and the presentation of that work outside of its original context. One of the roles of the museum curator is to peel back the layers of time and to unveil the intended function, context and placement of a work of art.

The Cleveland relief sculpture once framed a tabernacle, a receptacle placed above and behind the altar of a Catholic church for the storage and safekeeping of the reserved Eucharist. In Renaissance and later churches, the tabernacle was a fixed locked box. They could be made from various materials, but stone or metal, especially bronze or brass, were common. The main component was a lockable door for the security of the contents. A tabernacle’s sole function was the exclusive reservation of the consecrated Eucharist. It was essential that the tabernacle be anchored to the altar or adjacent wall and made lockable in order to prevent the removal of the consecrated wafers without authorization.

As we face the Cleveland tabernacle frame, we can see that the container, that is to say the original tabernacle, has not survived. It would have likely featured an ornate door in gilt-bronze. The Latin inscription over the doorway of the frame reads LOCHVS SANCTVS (Holy Place). Below, on the ornate door jambs, are the words LAVS DEO (Praise God). Until around 1000 AD, the only reason for reserving the sacrament was to be taken to the sick, homebound or dying by a priest. By the 1400s, the period of our tabernacle frame, devotional practices also included the Eucharistic adoration and communion distribution within the church, therefore necessitating secure storage of the reserved sacrament. It is noteworthy that Catholics and Orthodox Christians alike also refer to the Virgin Mary as the Tabernacle in their devotions, as she carried within her the body of Christ, a metaphor that derives from the Middle Ages.

The unused or reserved consecrated hosts also required special vessels for their containment within the tabernacle. Eucharistic vessels in various forms and made from varied precious materials met this need during the Middle Ages and the Renaissance. Foremost among these were the so-called Eucharistic doves which were made in quantity during the 12th and 13th centuries. Fashioned in the form of a dove, the symbol of the Holy Ghost, these vessels were generally made of copper or brass with gilded and enameled surface ornamentation. In the early Middle Ages, Eucharistic doves were suspended above an altar, but later placed within the tabernacle for security. As Eucharistic doves ceased to be used above the altar, a liturgical vessel called a “pyx,” a cylindrical box for the containment of the reserved hosts, was placed directly within the tabernacle.

In later times, the reserved host was placed within a receptacle known as the ciborium, a chalice-like vessel with a round bowl and a conical cover. This vessel contains the reserved sacrament for distributing Holy Communion within churches. The ciborium as a Eucharistic vessel appears to have emerged during the later Middle Ages. It would be incorrect to apply this term to a Eucharistic container before the 14th century. Earlier versions of this vessel are more properly referred to as a footed pyx and clear usage of the term ciborium corresponding to today’s usage emerged only during the 16th century. In today’s Roman Catholic Church, the pyx is exclusively the viatic pyx which is used for carrying communion to the sick.

It is clear that the Cleveland tabernacle frame was produced for a specific church. Its lavish embellishments suggest that specific artistic choices were made by someone. This may possibly have been a chapter of canons or perhaps a patron who was a high-ranking cleric. We do not have sufficient information to identify the church which housed the tabernacle. However, the style of the sculpture suggests an origin in Venice or the Veneto region. The pose, costumes and modeling of the flanking angels all suggest the work of a talented artist working under the influence of Tullio Lombardo (1455-1532), a brilliant Venetian marble sculptor, widely admired and imitated.

Tullio came from a family of sculptors. He was the brother of Antonio Lombardo and the son of Pietro Lombardo. Together, the family worked to carve tombs, monuments, pulpits, and altars for famous Venetian churches like Santi Giovanni e Paolo, Santi Apostoli and Santa Maria dei Miracoli. Given the ornate treatment of our tabernacle frame, we can deduce that it came from an important and well-funded church. We would, of course, love to know more. Questions remain. Who commissioned our tabernacle frame? Why was it removed? History shows us that fashions and tastes change over time. It is not impossible that the tabernacle was removed from its church to be replaced with a more up-to-date Baroque version. We should nevertheless be thankful that this beautiful sculpture has survived at all. It provides visual testimony to faith, worship and art in Renaissance Venice.