An Altarpiece by Ugolino da Siena 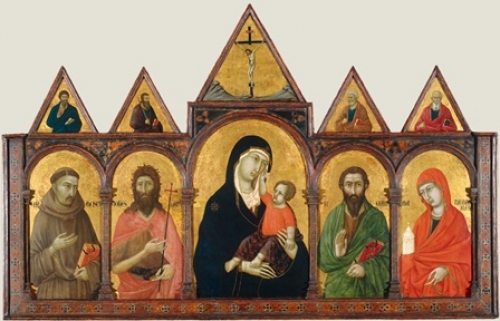 Visitors to the Cleveland Museum of Art's Italian Trecento gallery will notice that it is dominated by a painting from Tuscany. An altarpiece painted by the Sienese artist, Ugolino di Nerio da Siena (about 1280-1349), forms a major sightline object in that gallery. Dating to about 1317, the altarpiece has survived nearly 700 years relatively intact. It is admired by thousands of visitors each year. The particular choice of saints on this altarpiece suggests that it was made for a Franciscan church, though its original location and placement remains unknown.

At the work's center, the Madonna tenderly cradles her child, who, in turn, tugs upon her veil. She is flanked by Saints Francis of Assisi, John the Baptist, James, and Mary Magdalene. Many ideas important to the Franciscans find expression here. The gesture of the Christ Child as he tugs at his mother's veil echoes a popular Franciscan text, "The Meditations of the Life of Christ," which describes how Christ, on seeing his mother cry at her foreknowledge of his Passion, "put his little hand to her face as he would that she should not weep." During the Middle Ages, St. Francis was considered an alter Christus (another Christ) because of his stigmata and Christ-like life. Francis and John the Baptist both gesture towards Christ to indicate their special status as alter Christus and forerunner of Christ, as they were described by St. Bonaventure, minister general of the Franciscan order. Penitence was a key Franciscan doctrine, and the presence of Mary Magdalene with her ointment jar is undoubtedly a reference to penitence.

Because of his simplicity, piety, and devotion to all living creatures, St. Francis (1181-1226) has remained among the most revered and popular saints. Born to wealthy parents in Assisi, he first lived a life of spendthrift luxury. Francis later gave up all worldly goods and embraced an existence of utter poverty. Throughout his adult life, the saint experienced mystical trances and visions of Christ. When St. Francis gathered his first followers, he envisaged an order of laymen practicing apostolic poverty, living by laboring and begging, and sharing in his spirituality of obedience and freedom. Francis advocated that his disciples, like him, devote themselves to preaching, poverty and care of the sick. Francis was initially unwilling to regularize his rapidly growing band of itinerant preachers. In 1223, however, Francis presented to Pope Honorius III a more institutionalized rule for his order which emphasized total poverty. Thereafter, the order expanded rapidly, appealing particularly to urban benefactors. The Franciscans settled and preached primarily in urban centers. As the Franciscans flourished, their numbers included notable scholars, missionaries, mystics, and preachers.

During the 14th century, the Franciscans settled in cities and towns across Italy, and immediately attracted impressive numbers of followers. In order to accommodate such large congregations, they built large, barn-like churches, especially in the hilltop towns of Umbria and Tuscany. The painter of our altarpiece, Ugolino, made a career providing Franciscan churches with similar altarpieces. These multi-panel paintings were placed above and behind main altars in Franciscan churches where the friars and their congregations could meditate on their deeply held precepts.

Details of Ugolino's life are unknown. He was born around 1280 in Siena to a family of painters. His father, as well as his siblings, Guido and Muccio, was an artist. Ugolino da Siena was the most original and accomplished follower of Duccio di Buoninsegna, the greatest Sienese painter of the 14th century. Among Ugolino's most important commissions was the multi-panel altarpiece for the high altar of Santa Croce, the Franciscan church in Florence. He emerged as an independent master around 1315 or 1317. His early paintings, like the Madonna Contini Bonaccossi in the Pitti Palace, are painted in a style drawn from that of Duccio, but from about 1320 a distinct mature style emerges, spiritual and elegant. His choice of brighter colours was perhaps influenced by Simone Martini, another Sienese painter. Evidence of Ugolino's fondness for painting pious subject matter can be seen in his surviving paintings, including his altarpiece in Cleveland.

Unfortunately, history has not recorded where the Cleveland altarpiece was originally installed some 700 years ago, probably a church in Tuscany. We naturally wish to know more. Who commissioned this altarpiece and who prayed before it? Its presence today in the Cleveland Museum of Art provides a beautiful example of this important artist's work. It also provides a link to the deep spirituality of the Franciscans at that time.

Altarpiece of the Madonna and Child with Saints