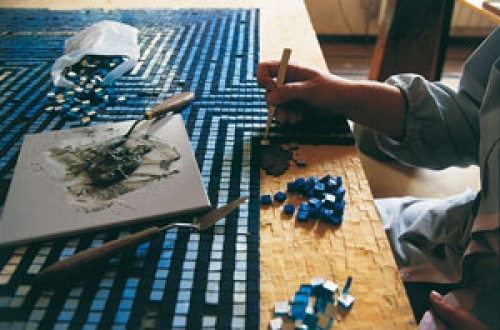 The first mosaic designs, dated to around 3000 BC, were cone-shaped terracotta pieces, imbedded -- point first -- into columns of the Stone Cone Temple in Mesopotamia. In Turkey, in the eighth century BC, black and white pebbles were used to form designs in paved walkways. By the fourth century BC, smooth river rocks and smaller stones were decorating floors in the homes of Greek nobles, and by 200 BC, tesserae -- small uniform pieces of stone and glass -- were cut to fit closer together, adding more detail to the mosaic designs.

Mosaic art grew with the Roman Empire, and throughout Europe artists used tesserae to create variations of classic Roman geometric patterns, some interspersed with decorative panels, for floors. Figures, animals, plants and other objects were soon added, and began to appear more frequently as the focal point of the artwork, not only on floors, but also on walls.

The ancient cities of Pompeii, Herculaneum and Stabiae -- all popular resort towns for Roman aristocrats -- provide excellent examples of various and beautiful mosaic designs. In the late fifth century, the fall of the Roman Empire brought rise to the Byzantine Empire and with it, a surge in Christianity. Mosaic art depicting religious subjects began to decorate churches, temples and even palaces.

It was during this time that smalti was created. Metal oxides were added to glass to create numerous vibrant, deep colors. The glass was made in small batches and poured onto a slab, causing uneven surfaces and hand cutting produced irregular edges. To create a lustrous finish, gold or silver leaf was pressed between two pieces of glass. The textures and colors of smalti added layers of depth to the mosaic artwork.

During the Middle Ages, the popularity of mosaic art declined in most of Europe, but it continued to be popular in Italy, especially in Venice, where a mosaic art school was established. Venetian artists formed a glassmaking guild and new types of glass -- aventurine (infused with metal oxides to form strands or specks of color), crackle and crystal, among others -- were created. In the late thirteenth century, all glassmakers moved to the island of Murano. The Venetian government, fearful the wood buildings that housed the high-heat furnaces of the glass factories would catch fire, and to protect the secrets of glassmaking, ordered the move.

The prestige of the glassmakers' guild and the development of new types of glass created more interest, and custom made glassware, crystal chandeliers and Venetian mirrors were shipped to countries throughout Europe. Some glassmakers left Venice to establish businesses in France, England and Eastern Europe.

In 1612, Antonio Neri, a Florentine chemist and priest, published L'Arte Vetraria, a book that detailed the materials, formulas and techniques used by Venetian glassmakers. The book was an instant success and the glassmaking methods were widely used. It's noted that just a few years later, several Italian glassmakers were sent to make glass in Jamestown VA, but considering the difficulties in forming new colonies, the project was not completed.

During the years following the Renaissance, mosaics -- while still popular in Italy -- were widely used to make reproductions of oil paintings. In the late 1800s, the Art Nouveau movement brought a resurgence to mosaics; and although mosaic tiles were being made and exported by Italian glassmakers to be used in buildings throughout the world, individuals were becoming interested in adding mosaic architectural elements to their homes. Today, with the wider interest that individuals have in creating art, numerous mosaic workshops are offered throughout Italy.

One popular workshop is conducted by Orsoni (www.orsoni.com), in operation since 1888. Established by Angelo Orsoni, who won acclaim for his mosaic artwork at the Grand Exhibition in Paris in 1889, the foundry produces tesserae and smalti in a nineteenth-century building settled into a quiet corner of Venice. In 2003, Lucio Orsoni, great-grandson of the founder and a well-known mosaic artist, opened the workshop. Several workshop programs are available and accommodations are also provided on the premises.

Also in Emilia-Romagna, about two hours southeast of Ravenna in the town of Mondaino, mosaic artists Milena Gasperini and Susan Harlock offers several courses of varying lengths that include lodging in their country farmhouses. Visit www.italianmosaiccourses.com for more information.

The art of making and creating artwork with mosaic glass tiles may be several thousand years old, but ancient and modern techniques have been combined to continue to manufacture the tiles, and to teach the process that is still very much alive and made in Italy.

View the embedded image gallery online at:
https://www.lagazzettaitaliana.com/history-culture/7637-glass-art-of-italy-mosaic#sigProIdac6bffa8a6
More in this category: « Rome's New Maxxi Vatican Splendors: A Journey through Faith and Art »