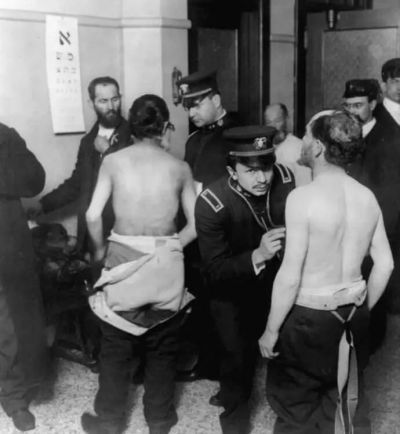 Over the last few months in this column, we have been exploring our Italian heritage from the perspective of our ancestors’ life experiences beginning in Italy and culminating with their arrival in America. In June we imagined what our ancestors’ transatlantic journey was like. In this final segment of the series, we will examine the immigrants’ experience once they arrived at the immigration processing center at Ellis Island.

For most of our ancestors, their time at Ellis Island was only a few hours, unless they were detained. As they departed from the barges, uniformed immigration service officers would greet their ferryboat as it docked at Ellis Island. Immigrants were directed to walk a gang plank from the ferry to the landing at the main building. The officers would give each immigrant a numbered identity tag. They entered the baggage room first, on the lower level, where they were instructed to leave their belongings while they continued with the inspection and registry process. The upper room was known as the Registry Room or the Great Hall. As immigrants made their way up the stairs, Public Health Service doctors would carefully watch them to ascertain if an immigrant had any trouble walking or breathing. It was in the Registry Room that a quick medical inspection would take place. As many as 5,000 immigrants passed through the Registry Room each day.

The Registry Room was a large and noisy space. It was divided with long, metal railings that formed queues to manage the flow of the immigrants as they made their way through medical inspections and a check of their passenger list. There were over 60 medical conditions that could keep an immigrant from being permitted entry. One of those diseases was trachoma, a contagious eye disease. To check for trachoma, the doctor would use a tool called a buttonhook to turn back a person's eyelid. It was uncomfortable and quite scary as a diagnosis of trachoma meant denied entry.

If a doctor thought that an immigrant might have one of the 60 diseases or conditions, their clothing was chalk marked with an X or other letter and the immigrant was detained for closer examination. About 15 to 20 percent of arrivals were placed in an examination room where another doctor performed a more thorough examination with basic medical equipment. If the presumed disability was a mental condition, the immigrant would be asked questions or given a test that required them to solve a puzzle or explain a photograph. If the immigrant “passed” this examination, he or she was then free to continue to enter the U.S. If he or she “failed,” a medical certificate was issued.

For those who were ill, there was a hospital located on Ellis Island. The hospital had two main functions. First, to treat those who had arrived ill from their journey. This group of patients were treated and usually released in a few days. The second function was to care for and stabilize, if necessary, those immigrants whose condition was serious enough to deny entry. These patients would be treated just enough to help ensure they could be returned to their home country. Between 1902 and 1951, over 275,000 patients were treated on Ellis Island. Sadly, approximately 4,000 individuals died while on the Island and surprisingly 350 babies were born there.

Board of Special Inquiry

Each immigrant who “failed” their medical examination was given a hearing before an Immigration Service (IS) Board of Special Inquiry. A panel made up of three IS officers would ask the immigrant questions about his or her occupation, finances, and if he or she had family living in the U.S. Usually, the Board of Special Inquiry overruled the earlier decision to refuse entry. Only about 2 percent of all immigrants were ultimately refused entry.

Once an immigrant was cleared to enter the U.S., the next stop was the Money Exchange. Here, an immigrant could exchange their foreign currency to American dollars. The next stop, if they did not already have a ticket to their destination, was to the Railroad Ticket Office. Each railway company had a ticketing office onsite. Those who were traveling to New England took a ferry to Manhattan while those going elsewhere beyond New York would get on a barge or ferry which took them to the railroad station located in Hoboken or Jersey City. While waiting, there were also concession stands where the immigrant could purchase food, not unlike our modern airports.

For most of our ancestors, the stay on Ellis Island was only a few hours of their weeks-long journey to America, but it was probably the most important step as passage through its “Golden Door” meant that he or she could finally seize the opportunity of a bright future in L’America.

The scariest part of the Ellis Island experience for our ancestors was the medical examination by the Public Health Service doctor. A "failed" examination led to a hearing and possible return to Italy.