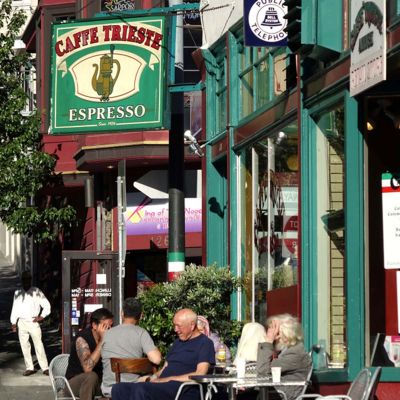 North Beach is a neighborhood in northeast San Francisco that is known today as San Francisco’s Little Italy. Perhaps the first observation one would make when visiting North Beach is that it is not a beach. Nor is it along the waterfront. So why call it North Beach? The simple answer is – it used to be. In the 1800s, this area was the northernmost district in San Francisco and was right along the water dubbing it North Beach. Around the late 19th century, the area was filled in with landfill and subsequently, warehouses, fishing wharves and docks were built on the newly formed shoreline. But the name stuck.

After the 1906 San Francisco earthquake, remembered as one of the worst and deadliest earthquakes in the history of the U.S., many Italian immigrants settled in the neighborhood of North Beach creating the Italian character it still holds today. Baseball legend Joe DiMaggio grew up in the neighborhood and briefly returned to live there with his wife, Marilyn Monroe, during the 1950s. The 36th mayor of San Francisco, Joseph Alioto, also grew up in the North Beach area. His Sicilian immigrant father and Italian American mother met on a fishing boat while escaping the earthquake. The Alioto family quickly became a staple in San Francisco and United States politics. Many members of the prominent family were raised in North Beach and the Alioto’s still play a big role in California and U.S. politics.

Today, the vibrant and colorful streets of North Beach still have a high concentration of Italian residents and businesses. Enjoy an espresso and lunch al fresco at an Italian café, indulge in the local Italian bakeries and shops. Pay a visit to the Museo Italo Americano, the first museum in the U.S. devoted exclusively to Italian and Italian American art and culture. For the full Italian experience, get in on a special event at the Italian Cultural Institute. The IIC, founded in 1978, is an official branch of the Italian government, dedicated to the promotion of the Italian language and culture in the U.S. through the organization of cultural events.

On Oct. 13, the city celebrates the annual San Francisco Italian Heritage Parade, the nation’s oldest Italian American parade. La Societa Italiana Mutua Beneficenza was founded by Nicola Larco in 1858 to help support the growing community of Italian immigrants in North Beach. Larco then founded the city’s first Columbus Day celebration. The festivities grew over the ensuing years and the parade was renamed the Italian Heritage Parade in 1994.