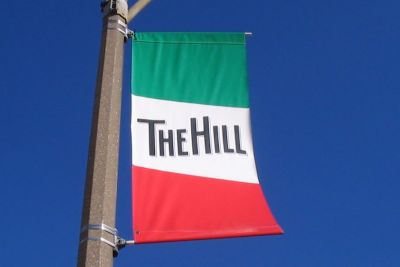 While many Little Italys across the U.S. are famous for their size, their festivals or the fact that they are a neighborhood in a trendy U.S. city, some Little Italys boast their own fame. St. Louis’ Little Italy, more affectionately known as The Hill, is one of those. Many Little Italys have  a depleted Italian population due to various circumstances occurring over the century, but St. Louis’ Little Italy is an exception to that. As of 2003, about three-quarters of the residents were Italian American, helped perhaps by the practice of rarely listing homes on the open market.

The Hill’s roots are intermixed with the city’s history, generating two of the region’s proudest exports: world-class athletes and Italian cuisine. Baseball greats Yogi Berra and Joe Garagiola grew up here, their boyhood homes across the street from each other on Elizabeth Ave. Four of the five St. Louisans on the U.S.A. 1950 FIFA World Cup championship team also came from here. Today, The Hill maintains a traditional collection of authentic Italian bakeries, grocery stores, restaurants, and mom-and-pop trattorias.

The Hill started with immigrants mostly from northern Italy (namely the Lombardy region) and Sicily in the late 19th century. Attracted by jobs in nearby plants established to exploit deposits of clay discovered by immigrants in the 1830s, Italians planted roots in the area given its name because of its close proximity to the highest point of the city.

With the growth of Italian immigration came the growth in the influence of the Roman Catholic Church. In 1900, Our Lady, Help of Christians, was founded to serve primarily Sicilian immigrants. Likewise, the Parish of St. Ambrose, founded in 1903 by members of St. Aloysius Gonzaga Parish, served primarily the recent Lombardi immigrants. The church of St. Ambrose was built in 1926 – by then the Parish had been a force in the community for 20 years. When Our Lady, Help of Christians Parish closed in 1975, St. Ambrose became the center for Catholic life among many Italian Americans in the St. Louis area.

Everything is colorful on The Hill. Even the fire hydrants are painted red, green and white. Its epicenter sums it up perfectly with St. Ambrose on one corner, an Italian bakery/restaurant on another, across the street an import shop, and a neighborhood tavern with a bocce court on the fourth corner.

The Hill is famous for its Italian markets and restaurants. This tight-knit, family-friendly neighborhood protects its history while, at the same time, sharing it with visitors and locals alike.