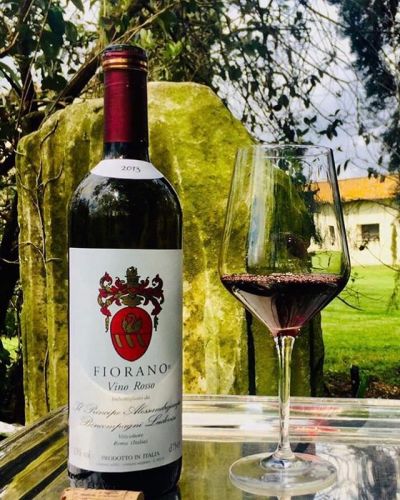 Once upon a time in the land of Venosa, there lived a prince, Alberico Boncompagni Ludovisi, born in 1918, a descendant of a 1,000-year-old line of Italian royalty which included Popes Gregory XIII and XV. This introverted prince was not interested in princely duties but rather the land and agriculture.

On the outskirts of Rome near the Via Appia Antica (ancient Appian Way) was his father’s estate, Fiorano, where the Prince lived and grew wheat, raised dairy cows and had a small vineyard of local grape varieties.

In 1946, he inherited Fiorano and replanted it with Bordeaux grapes, cabernet and merlot, along with two whites, malvasia and semillon. While other vintners stayed with local grapes and used chemicals, he was a pioneer of organic viticulture and grapes from France and Greece. He pruned the grapes to reduce yields and used indigenous yeasts for fermentation, producing an unfiltered, intense wine he aged in large barrels covered in a fine white mold. The estate, its methods and its proprietor were clearly unorthodox.

The wines remained obscure until a famous Italian wine and food critic, Luigi Veronelli, discovered them in the early 1960’s. Upon tasting, he convinced Prince Alberico to begin selling some of the wines. He wrote, “They enchant you with the first taste, burrow in your memory and make you forever better.” The Prince was known for his eccentric manner of doing business. Wine merchants were instructed to personally pick up orders on a specific date and time and pay in exact amounts of cash to his secretary. Few were privy to his cellar or his company.

Prince Alberico ceased winemaking and selling in 1995 when he was no longer able to care for the vineyard and began living in a hotel in Rome. After the harvest that year, he pulled out all the vines, leaving only a small plot of cabernet and merlot. His son-in-law, Piero Antinori, a famous Tuscan vintner who used modern winemaking methods, believed the Prince could not bear the thought of anyone else making his wines hence the destruction of the vines. The truth was he feared that Antinori himself would someday use his modern methods on his grapes and he would rather leave the vineyards to lie fallow.

In 2000, Luigi Veronelli, wanting to publicize Roman wines during an event, contacted the Prince whose secretary said he would have to purchase the entire lot of 14,000 bottles on the condition he could find the right people to distribute them. It took two people nearly one year to clean and catalogue the bottles. Sig. Veronelli hosted a series of tastings by invitation only and chose Andrea Carelli to handle the European and Asian markets, Paolo Domenghetti for American restaurant sales and Sergio Esposito for American retail sales. Esposito said, “To me, they are treasures. Their wines made from grapes that nobody knew could make wines like that. They had no history. It was one person’s devotion.”

As the Prince’s health declined, he had a change of heart about his vineyard and wished to pass on his wisdom and experience to a successor. He chose his cousin’s son, Alessandrojacopo who, with his father, Prince Paolo, ran the estate. Alessandrojacopo was given precise instructions as to grape varieties, choice of soils and system of vine training through winemaking, all by an organic method. He kept the same staff and winemaker who continued the method of picking and pressing the grapes by hand, fermenting in the Vecchia Cantina then moving to the Cantina Storica as he had been instructed and in 2002-2003 he had his first vintage. An air of intrigue still surrounds this royal family, its legacy and inheritance.

Upon Prince Alberico’s death in 2005, Prince Alessandrojacopo inherited Tenuta di Fiorano estate. He put the much-loved “Fiorano Rosso” back on the market in 2006. Wine writer, Burton Anderson, once called this red wine “the noblest Roman of them all.” Today, the estate is 200 hectares (almost 500 acres) of vineyards, olive groves, cropland, and pastures still worked in the traditions set forth by Prince Alberico. These vintners were and are true artisans expressing themselves through their life’s work.

Prince Alberico bequeathed a portion of the estate, Fattoria di Fiorano, to his granddaughter Alessia Antinori and her two sisters. As a trained enologist, Alessia uses biodynamic farming methods propagating from old vines and rootstock with natural yeast using cabernet and merlot grapes. Through the use of modern media she promotes her vision “to restore the Fiorano estate to its former majesty.” Prince Alessandrojacopo disputes any claims that they shall merge. The Antinori’s pristine cellar, new barrels and stylish restaurant all seem at odds with her grandfather’s strictly anti-commercial approach, but we should leave it up to lovers of his old wines to decide which vineyard is more faithful to Prince Alberico’s legacy and how this story ends.