The Sleeping Beauty: a Veneto Castle is Brought Back to Life 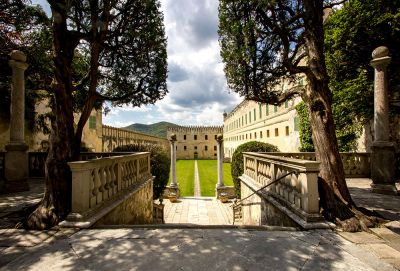 You’re off to Venice. You have a great sense of anticipation, looking forward to sailing down the Grand Canal, being dazzled by beautiful buildings and gorgeous gondoliers. But are you prepared to be disappointed by the crowds? Venice can get extremely crowded at peak times: ugly gigantic cruise ships dwarfing the city, policemen directing the flow of tourists over the bridge next to St Mark’s Square, waiting in queues for entry to landmarks, or simply wanting to find a place to sit down.

It’s amazing, given the millions who flock into Venice each year, that hardly any of them venture beyond the lagoon. Yet on the fringes of the curiously conical Euganean Hills, a cluster of extinct volcanoes which provided Venice with the stone for its pavements a millennium ago, there’s a fantastic enormous castle, and nobody’s heard of it.

Catajo Castle, with its 365 rooms, its staircases for horses (so that nobles didn’t need to dismount in order to reach the first floor), its formal gardens, and its historically very important frescoes, has almost sleeping beauty status, having been neglected for 100 years. You can’t miss this huge crumbling edifice of ochre-coloured stone and brick standing on the main Padua-Ferrara road. The setting is beautiful, surrounded by vineyards with a gorgeous green semi-circular backdrop of wooded hills, next to the Battaglia Canal (which carried the stone to pave Venice.) It had been lived in for at least the last three generations by three sisters who died in their 90s, and a nephew inherited the property but had no interest in its neglected state. It went up for auction recently but there were no takers, presumably because however cheap it was, (€3 million reserve price) the repair bill would be at least 20 times more.

The Millionaire Who Invented Vileda Dishcloths
And then along came the prince in the form of Sergio Cervellin, a multi-millionaire inventor of space-age domestic appliances and arguably the Italian equivalent of Sir James Dyson. (He did indeed invent those handy blue and white striped dishcloths.) He was driving past in his silver Rolls Royce and was struck by the castle, coming back later as a paying visitor for another look. Reader, he bought it.

I went to meet him to talk about his plans to restore it and open many more of its rooms to the public. Locally, he’s become a hero, the talk of the region, and the man who will generate new impetus into the economy now that the traditional spa towns of the area are struggling to keep going. People see the castle as a future magnet for all those tourists who might fancy an interesting day out, under an hour from Venice.

Over a narrow bridge, the 12-foot wrought iron gates at the entrance are locked, guarded on the top of each gatepost by sculpted baroque figures of gods, one with a rusting metal fig leaf and the other having lost his modesty. A hopeful tourist wants to be allowed in.

“Sorry,” I said. “Privato.”
But not for long. Now open 3 days a week, once restoration makes its full impact, it will probably open for more.

I pick my way up the horses’ staircase (rather awkward unless you happen to be wearing horse shoes) to the terrace where the new owner himself is waiting. He has typical Italian tanned good looks: dark hair, slender build, casually dressed in jeans and dazzlingly white shirt, and a great friendly smile. We settle down in the office and he leans back, hands clasped behind his head, and begins to chat.

Of course, the big question is why. Why on earth would someone risk millions to restore a dilapidated castle and for no obvious financial return? You’ve only to go to Porto Cervo in Sardinia to see what most wealthy Italians spend their money on: enormous vulgar yachts with uniformed staff to keep curious tourists at bay.

Is it simply the challenge of seeing beyond the wreckage to a lovely building, I ask, or a passion for historic monuments, a future home, luxury apartments, an exclusive upmarket hotel, or something else?

“Good question,” he says with a smile, and the answer emerges over our conversation.

Sergio Cervellin is a local man who grew up near Treviso. Asking about his school days and what had interested him, I assume the answer will be history or architecture.

But of course! His company is known as “Pulire” (to clean) and they make all kinds of cleaning equipment in an enormous Japanese-style factory. It looks like a huge indoor playground full of brightly coloured machines which appear to have been built from giant blocks of Lego. You wouldn’t have thought that humble cleaning would have such a high profile, hi-tech image, but they have developed systems for cleaning huge industrial spaces with “Tiger Speed” machines which work on batteries lasting for 4 hours. Mr Cervellin candidly admits that Italy doesn’t have these grand spaces to clean, but he has secured the cleaning franchise for Dubai and Singapore airports with his moltiuso machines.

From modest beginnings, the business quickly expanded thanks to constant new inventions. Still a very young man in 2000, he was in a position to buy and restore an important early-18th century villa at Castelfranco where he and his family still live. Perhaps this was the inspiration to take on an even more daunting restoration task.

What are his priorities? He took over in April, and there are already great changes. The gardens and small lake have been cleared, and he is proud of the fact that the two fountains which were hidden by a century’s worth of undergrowth are not only on view, but working again.

Inside the castle there is so much to be done that it must be difficult to know where to begin. In the courtyard, there’s dust everywhere. Stone masons are at work repairing two pillars on either side of the entrance to the outdoor entertainment space. Here you can just detect a very faded fresco showing raised curtains as if for a stage performance. Once, the whole area could be flooded for miniature naval battles. The twinkle in his eye tells me that he’d like to see all this return, but, as he puts it, “step by step.” I point out that he said he didn’t speak English, and here he is employing this very useful phrase, but he just shrugs.

“I am Italian. My only other language is speaking with my hands.”

On the main floor, the frescoes by Zelotti, a pupil of Veronese, tell the story of the Obizzi family who scorned the idea of newly fashionable villa in favour of a more medieval-looking building in keeping with their history as soldiers of fortune.

The castle has been so neglected, with its shutters closed for so long, that the frescoes are well-preserved and brightly coloured. They are truly spectacular and extend throughout the first floor. (Elsewhere there are frescoes by Veronese’s brother.) The interior spaces need little immediate attention, allowing the more important work of clearing the roof of weeds, and even small trees, to take place first.

Wine festivals will be held in the castle. He has a particular interest in vines grown in volcanic soils from all over the country, including the immediate vicinity, which has good D.O.C. wines, but unknown outside Italy.

There’s a certain amount of frustration with tourist authorities. Signor Cervellin is happy to comply with requirements for extra toilet facilities for visitors by installing two blocks of toilets inside large raised boxes so that they don't damage floors, walls or ceilings, but he’s very impatient about regulations for advertising and how he might get the place on the tourist map. And this seems to be what it’s all about. The word bellezza (beauty) crops up in his conversation a lot, because what he clearly wants to achieve is his vision of a beautiful medieval castle, so that as many people as possible can see and appreciate it. He stresses how important it is to have sensibility and a great team working together.

Mr. Cervellin doesn't intend to live there. Already, he said, people are rewarding his efforts by putting positive comments and thanks on TripAdvisor. He reckons that the full restoration will take 10 years and must eventually attract masses of tourists given its importance and its proximity to Venice.
It is a wonderful act of philanthropy: in England, he'd surely get a knighthood.

So, if you’re thinking of a holiday break in Venice, why not take a day trip on the direct train from Venice to Battaglia Terme and walk along by the ancient canal to Catajo Castle? I think you’ll be impressed by La Grande Bellezza.

Myra Robinson’s amusing book, “The Best Mud in Italy,” about her life in the faded spa town next to this castle, is available on Kindle.

Tweet
More in this category: « Priverno Wishing to Get Married in Italy? Here is What You Need to Know »