"Oh Say Can You See:" Rocco Scotti, Son of Immigrants 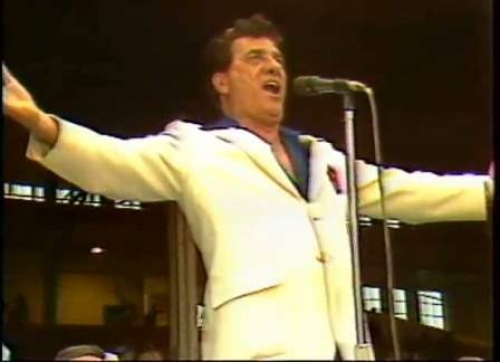 Poet Francis Scott Key wrote the words to the song eyeballing the British bombardment of Ft. McHenry in Chesapeake Bay. The music and lyrics became so popular it was renamed "The Star Spangled Banner." It became the national anthem when President Hoover signed a March 3, 1931 resolution.

The baritone/tenor Rocco Scotti, who sang the anthem more times than anyone, passed away last month at 95-years-old. Raised in Cleveland's Little Italy, he estimated he sang the anthem 10,000 times, mostly at Cleveland Indians baseball games. He would always say "This is my country and I am a proud American of Italian descent."

His parents, Nicholas and Jean Madeline Biscotti, immigrated to America from Foggia, Italy living in cities like Philadelphia and Pittsburgh looking for work and opportunity. One of 14 children, Rocco was born in Ambler, PA and grew up in Cleveland's Little Italy where he attended Murray Hill Elementary School and later Oliver Hazard Perry. In 1939, Rocco graduated from Collinwood High School.

Like his father, Scotti worked as a construction laborer but continued to sing and study with a voice coach. During this era he met his wife, June, a receptionist in a doctor's office. They married in 1945 and moved to New York where Scotti continued voice studies. Two years later, they returned to Cleveland. Friends of actress Eleanor Parker ("Cleveland's Curtain Pullers") invited the couple to Los Angeles where he continued studies and performed in an "Evening in Paris" show. Warner Brothers gave Scotti a screen test and he was urged to take acting classes but decided against it. They returned to Cleveland.

In 1948 and working full time in construction, he resumed voice lessons. He made his anthem debut at Municipal Stadium for the Cleveland Indians on Opening Day in 1952 when the Tribe played the Baltimore Orioles. He was such a fan favorite he became a regular anthem singer and good friends with his favorite player, "Rapid" Bob Feller.

The memories are numerous for Scotti. He recalls a Higbee Department Store secretary who was so taken with Scotti's voice that he carried out her dying wish singing the anthem at her wake.

Other notable memories included two visits to Italy where he recorded two albums with the Rome Symphony. During each recording session, he lived in an apartment across from the majestic Colosseum. He sang the anthem at the local appearances of Presidents Reagan and Ford. President Ford sent him Christmas cards. He played a part in actor Tom Hanks' show at the Ohio Theater in 1991.

America is proud of Rocco Scotti and he was most proud of being named "Star Spangled Banner Singer of the Millennium" by Congress in 2000.