The Cleveland Museum of Art Announces New Acquisitions and Unveilings 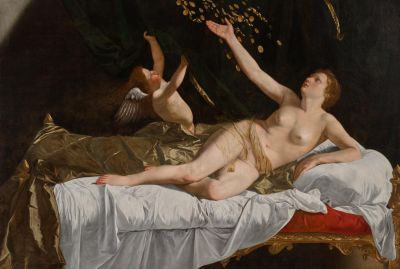 Recent acquisitions by the Cleveland Museum of Art include Aurelio Lombardo’s “Dido,” an exquisitely carved early 16th-century marble relief sculpture, and a drawing by Giulio Romano directly related to one of the artist’s most important frescoed ceilings in Italy.

On January 29, 2021, the CMA acquired Aurelio Lombardo’s sculpture “Dido,” from the auction of Hester Diamond’s collection at Sotheby’s, NY. Created at a pivotal moment in the birth of Mannerist sculpture, it depicts the legendary queen Dido. Departing from the customary portrayal of Dido as a forlorn lover abandoned by the Trojan hero Aeneas, Aurelio’s Dido is active and defiant. The sculpture’s inscription identifies her as the queen of Carthage, and she is represented pulling aside an oxhide curtain, a reference to Virgil’s description of the mythical founding of Carthage in his epic poem, the “Aeneid.”

Dido is depicted nude, and her wavy hair is worn in loose knots, an allusion to Hellenistic images of Aphrodite. Lombardo’s virtuoso carving ranges from the delicate, low relief of the oxhide-draped altar to an elbow and knee that break free from the marble surface. Dido’s parted lips and striking, articulated pupils convey intense emotion. The softness of her flesh is contrasted with the taut folds of draped and stretched animal skin.

“Dido” is among a handful of marble sculptures attributed to the artist and was likely created for display in a studiolo, a place of study featuring refined works of art appreciated by humanist scholars and aficionados during the Renaissance. Ancient Greek and Roman works of art were most coveted, but reliefs such as “Dido,” created in the stylistic language of ancient sculpture and illustrating key figures from ancient texts, were highly sought after, particularly in northern Italy.

“Dido” exemplifies a vital transition in Italian sculpture from Renaissance clarity to the Mannerist play of proportion and movement. It represents the highest degree of sophistication and innovation of an art form rarely encountered on the market.

The CMA has also acquired a figure study by Giulio Romano that is one of eight surviving preparatory studies for a frescoed ceiling at the Palazzo del Te in Italy.

Italian painter Giulio Pippi, called Giulio Romano, is first recorded as a student of Raphael in Rome during his work on the papal apartments and is among the most celebrated of the highly talented pupils surrounding the master. His art was grounded in the emulation of antique forms, and his contemporaries praised him for his ability to spontaneously execute variations on antique motifs through drawing.

“Justice” is a preparatory drawing relating directly to one of Giulio’s most important frescoed ceilings at the Palazzo del Te at Mantua, that of the vaulted Camera di Attilio Regolo (Atilius Regulus) painted between 1530 and 1534. The four main spandrels of the vault are decorated with scenes that represent moral virtue exemplified by four ancient military rulers, while a tribute to the Duke of Mantua, the “Allegory of the Virtues of Federico Gonzaga,” adorns the center of the ceiling. “Justice” is the design for one of four single figures representing virtues placed between the narrative scenes. The drawing dates from the 1530s, when Giulio worked primarily in pen and ink with added wash for shadow. The elegant figure is turned to one side in an active pose with fluttering dress and hair; she holds a balance in her left hand and sword in her right.

This is the second drawing by Giulio to enter the CMA collection in recent years. In 2020, the museum acquired “Design for a Frieze with a Putto and Acanthus Leaves,” perhaps a design for an ornamental rinceau (doorway surround) dated to 1520.

The Cleveland Museum of Art Exhibition “Variations: The Reuse of Models in Paintings by Orazio and Artemisia Gentileschi” unveils the newly conserved painting “Danaë” by Orazio Gentileschi

“The comprehensive treatment of ‘Danaë’ has restored the painting’s compositional clarity and spatial depth as well as the artist’s tonal variations and modeling,” said William M. Griswold, director of the CMA. “The exhibition presents a wonderful opportunity for visitors to learn about the conservation of an Italian Baroque masterpiece and enjoy it alongside other works by the master and his daughter, Artemisia.”

Like many artists of the period, Orazio used cartoons or tracings to create replicas of successful works. The CMA’s “Danaë” is the second version of a painting that the artist made in Genoa around 1621–22. Orazio’s spare compositions focus on light and texture and incorporate figures from his earlier paintings. His distinctive combination of naturalistic elegance and drama inspired a tremendous demand for both new work and copies by the artist. Both “Danaë” and the much-copied “Penitent Magdalene,” a little-known iteration of which is featured in the exhibition, are examples of subsequent versions of popular paintings by the artist.

In addition to copying his own work, Orazio adapted his models for new compositions. For example, the exhibition explores how the figure in “Young Woman with a Violin (Saint Cecilia)” from the Detroit Institute of Arts is transformed in “Judith and Her Maidservant with the Head of Holofernes” from the Wadsworth Atheneum Museum of Art. Artemisia, who was an eminent painter and trained in her father’s studio, adopted these practices but developed her own intensely expressive style. The figure in her “Danaë,” on loan from the Saint Louis Art Museum, departs stylistically from her father’s depiction of Danaë but closely relates to the figure in the Etro Collection’s painting “Death of Cleopatra,” which is attributed to Orazio or Artemisia and reproduced in the exhibition. A formal comparison of the two “Danaës” reveals significant differences in the painting of flesh tones and drapery, with Artemisia’s fabric stiffer than Orazio’s and her heroine’s body depicted with greater naturalism.

“It is moving to see familiar figures echo across paintings by Orazio and Artemisia and, as they are woven into new narratives throughout the exhibition, how they evolve to take on remarkably different emotional and stylistic roles,” said Cory Korkow, curator of European paintings and sculpture, 1500–1800.

The digital component in “Variations: The Reuse of Models in Paintings by Orazio and Artemisia Gentileschi” features three case studies comparing six paintings that illustrate how Orazio and Artemisia Gentileschi reworked, reused and repeated images and forms to create new works. Visitors are encouraged to approach the artworks and look closely to discover relationships.

The Cleveland Museum of Art is now open to the public. Tickets are required for free general admission, Tuesday to Sunday, 10 a.m. to 5 p.m. The museum is closed Mondays. Reserve your tickets at www.clevelandart.org.