Reflections on Italian Lockdown: Will Life Ever Be the Same Again? 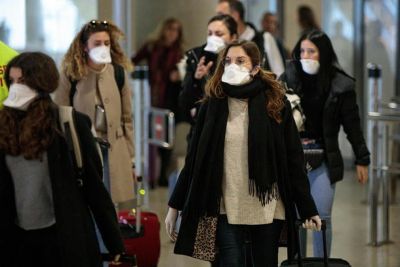 I am longing to be back at my second home in the Veneto after leaving in a hurry just before lockdown occurred in early March. Now that Italy is gradually returning to a semblance of normality, I’m curious to find out how the virus has affected Italians’ lives. Do they believe everything will be the same or has La Dolce Vita changed forever?

Massimo Mommolo is the Mayor of the spa town of Battaglia Terme, not far from the village of Vo which was the first place to be completely isolated when the deadly virus struck. He has strong views about how it has affected his town and its people. “Leap years are years of disaster” was a favorite saying of the Mayor’s grandmother and this year he feels it could be true.

With the deserted streets of the shutdown, the unreal silence reminded him of a nuclear catastrophe. He will never forget, he says, the sight of a convoy of military vehicles transporting coffins because there was nowhere at the time to bury the victims. In the context of having had to deal with national and regional cuts in public health, education, and welfare, he says he became truly aware and appreciative of the selfless work of doctors, nurses and caregivers.

He comments wryly on the new vocabulary which has entered the language: “lo smart working” and “il lockdown.” Things will not be as they were before, he says. We could emerge with a better society, which is more cohesive and less individualistic. Or not. Memories are short. He hopes we have learned a lesson.

Carmen, a former councillor, made the brave decision a few years ago to establish her own company, “Viaggiare Curiosi,” an eco-tourism business. “The virus changed my springtime but not my life,” says Carmen. “We have survived for two months with our new priority, the family. My business has been amongst the first to start again because outdoor activities and sustainable tourism have convinced me that I made the right decision, to guarantee a healthy way to spend leisure time. We have already restarted our guided trekking, bike and e-bike rentals for couples and families, and now welcome groups of up to 10 people. The office in Montegrotto Terme also opened a couple of weeks ago.”

Paola lives and works as a pharmacy assistant in a small rural village near Monselice. Although the work has always been demanding, she has never before been this busy. Initially, the pharmacy had trouble finding enough masks and gloves. Today the pharmacy has a new, reliable source for PPE: the inmates of Padua prison. Inside the pharmacy, a new air-purifying device has been installed and customers are only allowed in two at a time. The pharmacy has for several years provided a book exchange (which curiously is known in Italian as a “book crossing”) where shelves outside the shop are filled with books that can be exchanged for others by anyone who passes. Each evening Paola now sprays all the books with disinfectant. She is optimistic that the worst is over and things are returning to normal.

Maurizio and Edi have an award-winning restaurant in Umbria. Edi is a superb chef and Maurizio a talented sommelier. From small beginnings, they made huge advances but are now worried that everything they have worked for might be lost. They recently moved from their tiny trattoria in the village of Baschi near Orvieto to a larger prestigious establishment, La Sala Della Comitissa in Civita Castellana, recognized this year in the Guide Michelin. They have worked so hard for so many years and deserve success, so everyone is keeping their fingers crossed.

Edoardo has experienced a complete change in his studies at the University of Bologna. He now receives lectures and other teaching online. To his surprise, he was even able to take an exam online. Although it is not what he expected, Edoardo believes that the enforced lockdown has greatly improved his computer skills, which will likely help him in the future job market.

Sandro works in the largest hospital in the Veneto, where Italy’s first case of Covid-19 was diagnosed and where the patient subsequently was the first to die. He lives in the outer suburbs with his wife, also a doctor, and three sons and usually cycles to work, learning English by listening to the Harry Potter books on his headphones. “It was 3 a.m. I had to go quickly in hospital. When I opened the door and stepped outside, I was stunned by the silence. No voices (obviously), no cars, no animal sounds, no wind. Very impressive. I've never listened to such a silence in my life.”

Luca works within a city warehouse and his job changed when the virus struck. Currently, they are still providing protective wear for the police and ambulance services, but he thinks they will begin to return to normal soon. As he has a family of four children, he will try to supplement his income by coaching basketball, but says times are difficult and will remain so for some time.

My conversations with older friends and neighbours all had one thing in common: a reluctance to talk about their experiences. I think the effects of the virus were too immediate and distressing for most people, with loved ones now gone, and many others who had been extremely ill. They are now more fearful and more reluctant to resume life as it was before the pandemic.

“When the coronavirus situation in Italy started to get worse in late February, the U.S. Army installation mirrored the Italian government and closed all schools and childcare facilities. As the working mother of a baby boy born in November, I had to scramble to find a way to continue working without the support of the day-care I had been using. This was definitely an exercise in time management! My work, as the Public Services Librarian at the U.S. Army Garrison Italy, is normally filled with physical interactions – children's story times, teaching newcomers about our resources and handling books, DVDs and other materials. Although our Library has been closed since early March, we continue to provide online resources for our patrons. But I know that the families and soldiers who rely on our facility and services have been missing the Library a great deal. Re-opening will be a challenge as well – small children are not willing participants in social distancing!"

"It was devastating to see the coronavirus situation unfold in Italy and the restrictions were especially challenging for my widowed mother-in-law, who was isolated in her home in another town. However, the quarantine and lockdown gave us an unexpected window to focus on our infant son. We had not anticipated having full days home with him these past months and even with the conflicts of teleworking, we've been able to dedicate ourselves to him at a crucial time in his development. A bittersweet gift, given all the loss around us.”

Tweet
More in this category: « The Healthy Italian "Made in Italy" by Laura Morelli »