A Civic Commission by Andrea Gritti, Doge of Venice 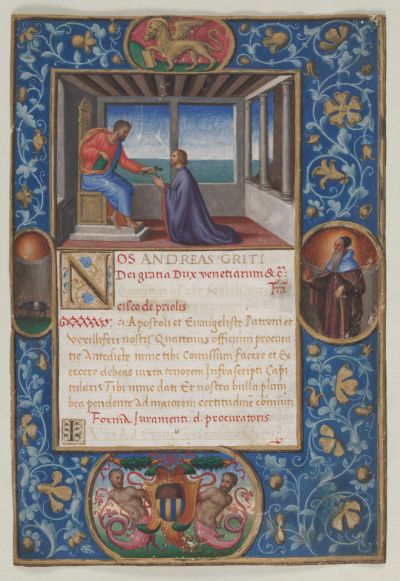 An illuminated manuscript is, by definition, a book that was written by hand, customarily on vellum or animal skin and decorated with colorful paint and gold leaf. This was the form of book production before the spread of printing technology after the 15th century. When we consider illuminated manuscripts, we typically think of liturgical or devotional books such as medieval bibles or books of hours. However, many secular and legal manuscripts were also illuminated during the Middle Ages and Renaissance. Italy developed a rich tradition in this artistic medium. One such example is a beautifully illuminated commission granted by the Doge of Venice, Andrea Gritti, to Francesco de Priuli now preserved in the Cleveland Museum of Art.

The opening words read in Latin: Nos Andreas Griti, Dei gratia Dux venetiarum… (Our Andrea Gritti, By the Grace of God Duke of the Venetians…). The miniature shows the enthroned figure of St. Mark, patron saint of Venice, holding a book in his right hand as he presents the symbolic keys of Venice to the kneeling figure of Francesco de Priuli upon his appointment as Procurator of St. Mark's Basilica. The scene takes place in an arcaded room with sweeping views to the open sea beyond. Beneath the miniature are 12 lines of text, the opening of a ducale, or commission, issued by Doge Andrea Gritti (1455-1538) announcing de Priuli's appointment. Gritti was Doge of Venice from 1523 until his death, following a distinguished diplomatic and military career.

The Patriarchal Cathedral Basilica of Saint Mark, commonly known as the Basilica di San Marco, is the most famous of Venice’s churches and one of the best-known examples of Italo-Byzantine architecture. It lies at the eastern end of the Piazza San Marco, adjacent and connected to the Doge's Palace. Originally, it was the chapel of the Doge and has served as the city's cathedral only since 1807 when it became the seat of the Patriarch of Venice, archbishop of the Roman Catholic Archdiocese of Venice. Because of its opulent design, gold ground mosaics and its status as a symbol of Venetian wealth and power, this spectacular building has been known from the 11th century on by the nickname Chiesa d'Oro (Church of gold).

Francesco de Priuli is recorded as having taken up the appointment of procurator in the 1520s. The de Priuli were a distinguished Venetian family that held the position of Procurator of St. Mark's through 14 generations spanning the early 1400s through the end of the 17th century. The office of Procurator of St. Mark’s was the second most prestigious life appointment in the Republic of Venice after that of the Doge. The post originated in the ninth century. The procurator’s duties were to attend to the fabric and maintenance of St. Mark’s Basilica as well as its administration. Originally, there was one procurator, but between 1231 and 1442 their numbers increased to nine and their duties expanded to include the protection of orphans, care of the infirm and the execution of wills. Appointment as a procurator of San Marco was one of the highest honors within the Republic of Venice.    The document now in Cleveland was known as a ducale or promissione, an oath of office sworn by the procurator. It contained not only an oath of allegiance but also spelled out his official duties. It was usually confirmed by an accompanying legal document. These were at first copied on vellum by hand, like our example, and later printed. Eventually, over time, they could be several hundred pages in length. Our beautifully decorated leaf would have originally served as the first page or frontispiece from the promissione of de Priuli’s appointment and officiated by Doge Andrea Gritti. Other civic documents of Andrea Gritti, illuminated in a similar style, are preserved in various museums and libraries such as the Marciana in Venice and the Bodleian Library, Oxford and elsewhere.

The illumination itself is the work of Benedetto Bordone (1460-1531), a Paduan-born miniaturist who became prominent in Venice. Bordone was also an editor and cartographer. The decorative borders are carefully designed to complement the main miniature and include many of the features found in Bordone's work. The borders appear to be edged in thin gilt-bronze bars that give the illusion of fine metalwork. Within the bars is a meandering but symmetrical vine scroll highlighted with gold flowers, the whole set against a deep blue ground. Four oval cartouches are occupied by the Lion of St. Mark (top), the De Priuli Arms (bottom), St. Anthony the Great (right), and his symbol, a swine (left). The Priuli Arms below are festooned with wreaths and supported by mermen with horns and pink tails. The decoration is a superb example of humanist book illumination. A Renaissance cultural movement, humanism turned away from medieval scholasticism and embraced a revived interest in ancient Greek and Roman thought. This leaf is therefore both an important historical document as well as a remarkable example of book painting in Renaissance Venice. It exemplifies the dominant taste in secular books emerging from the rise of humanism for which Venice was an important center in the 1400s. This leaf visually transports us to this dynamic and transformative moment in Venetian history and art.

Tweet
More in this category: « Ferragosto: The Peak of Italy's Month of Relaxation Back to School in Italy »