Saving History: An Old Tradition New to Me 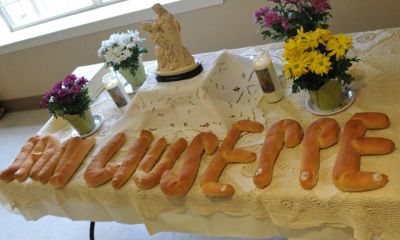 An Italian tradition in which I never had the opportunity to participate is the St. Joseph’s Table. I had read about it and heard about it from other Italian Americans, but it was not something my family celebrated. After finally attending last month, I can now really appreciate and understand this great Italian community tradition.

The St. Joseph’s Table is celebrated all over Italy with some variations depending on the town, but is said to have originated in Sicily. As the centuries-old story goes, Sicily was experiencing a long and devastating spring drought. Prayers were offered to St. Joseph and the rains came soon after, saving the crops and the region from famine. The St. Joseph Table was a way to celebrate and share the harvest and show appreciation to the Saint.

I attended the St. Joseph’s Table given by The Kalena Club of Cleveland at the Highland Heights Community Center on March 24. The Kalena Club of Cleveland was founded in 1923. Members are from Casacalenda, Campobasso, Italy, a paese where the St. Joseph Table has been celebrated for centuries. Incidentally, Cleveland has one of the largest populations of immigrants and descendants from Casacalenda in the U.S.

While the club has been in existence for over 95 years, they only began hosting the Tavola di San Giuseppe 13 years ago. Club member Giovanni Di Lalla had taken a trip with his wife to his hometown of Casacalenda in 2005, making sure to be there during St. Joseph’s Day. After getting back from Italy, Giovanni realized how much he missed the annual tradition and suggested to his fellow Kalena Club members that it would be great to host a St. Joseph Table and share the tradition here in Cleveland.

The meal that is served has many courses which are meatless because it occurs during Lent. I enjoyed all the courses, but particularly the beans (faggioli) course that contained chick peas (ceci), fava (fave) beans and peas (piselli). A course I found interesting and unique was the pasta with breadcrumbs and raisins (bucatini con mollica). I learned that breadcrumbs on pasta were a less expensive substitute for parmesan cheese which centuries ago many Italians could not afford. Also, in resembling sawdust, they remind us of St. Joseph’s profession as a carpenter.

What really struck me about the St. Joseph’s Table celebration is that it was entirely free and open to anyone who wished to come. Club Kalena is very welcoming and the members take it upon themselves to prepare the food which they provide and serve as well as prepare an altar to St. Joseph. It is not a fancy event or one organized to raise money. The spirit of the St. Joseph’s Table, besides honoring the saint, is the sharing of food and enjoying fellowship with others. It serves as a reminder of these important Italian cultural values that we should always keep present in our lives.