Rocky Marciano Had the Will to Win 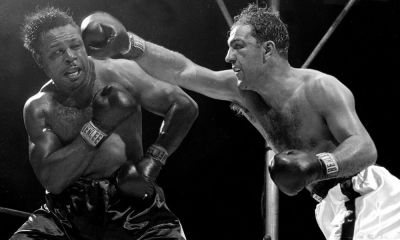 Legendary Italian American boxer Rocky Marciano held the heavyweight boxing title from 1952 to 1956. He is the only heavyweight champion to have finished his career undefeated. He had 43 knockout wins and won all 49 of his professional fights. Marciano was knocked down only twice in his entire professional career. Many boxing fans say that Muhammad Ali was the greatest boxer, but many others say the greatest was Rocky.

He was born Rocco Francis Marchegiano on September 1, 1923 in a tough neighborhood in Brockton, MA. His father, Pierino, worked at a shoe factory. His mother's name was Pasqualina. Pierino was from the Italian region of Abruzzo and Pasqualina was from Campania. Rocky would spend much of his life trying to make sure that his family would not live in an impoverished neighborhood anymore. He dropped out of high school and had many different jobs to help his family, such as a dishwasher and gardener.

As a teenager, Rocky played baseball and football and dreamed of a professional career in one of those sports. He won many fist fights as a youngster, after arguing with troublemakers for insulting his friends, but was never known to start a fight.

After being drafted into the U.S. Army in 1943, Rocky started boxing. Stationed in Swansea, Wales, he helped ferry supplies across the English Channel to Normandy. Rocky received an honorable discharge from the Army in the summer of 1946. He returned home to Brockton and continued to box as an amateur.

In 1947, Marciano, Vinnie Colombo, Eugene Sylvester, and Red Gormley hopped into Colombo’s old automobile and drove to Fayetteville, NC to try out for the Fayetteville Cubs, a farm team for the Chicago Cubs baseball team. Rocky did not make the team because he could not accurately throw from home plate to second base due to an arm injury that occurred while in the Army. That ruined his dreams of being a professional baseball player. The following year, he became a professional boxer.

By the spring of 1949, his boxing skills had received attention after he knocked out his first 16 opponents. The people that he fought during that time were not good fighters, but he learned much about the sport during that period. The quality of his opponents started to improve, and he continued to beat his opponents, knocking out most of them.

By October 26, 1951, Rocky had 37 wins and 32 knockouts under his belt. That was the day that Rocky faced one of his toughest opponents, the former heavyweight champion Joe Louis. Rocky knocked him out in the eighth round. Rocky had such mixed feelings about beating a man that he had considered his hero that he cried after the fight.

After another five fights, Rocky got the chance to go for the title. Jersey Joe Walcott was the defending champion and Rocky was the challenger when the pair met in Philadelphia on September 23, 1952. Walcott was a very good fighter. In the first round, Rocky was knocked down for the first time in his career with a left hook from Walcott. Rocky was behind on points and struggling all night, but he refused to give up and finally knocked Walcott unconscious with a right punch to the jaw in the 13th round. Rocky won the championship belt.

Marciano defended his title only six times, but some of those fights are considered classics by boxing fans. He knocked out Walcott in the first round of their rematch in 1953. He then knocked out challenger Roland La Starza later that year. La Starza was also a great Italian American fighter. Both boxers were undefeated at the time of the fight with La Starza's record at 37-0.

Rocky won a decision against Ezzard Charles in 1954. He almost lost his title in their rematch later that year. In the sixth round, Charles cut Rocky's nose so badly that his cornerman could not stop the bleeding. The ring doctor watched the cut closely and wanted to stop the fight, but Rocky came back forcefully against Charles in the eighth round and knocked him out. He defended his title against Don Cockell in 1955 by a knockout. Rocky's last fight was September 21, 1955, the third time he defended his title in Yankee Stadium. He knocked out Archie Moore in the ninth round.

On April 27, 1956, Rocky retired from boxing. He was 32-years-old. He said that he wanted to spend more time with his family. Sadly, and unfortunately, this legendary boxer died in an airplane crash in Iowa on a business trip on August 31, 1969. He was 45.

Tweet
More in this category: « A Look Back: Editor Speaks Jimmy Alleva »