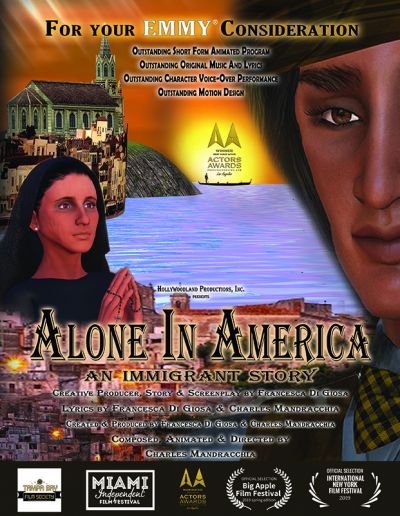 Once upon a time in a small Italian village, a rambunctious boy dreamed of making something of himself, despite his bullying uncles who are pressuring Mama to send the boy away. However, a mother’s heart never surrenders.

Shortly after his magnificent arrival, young Rodolfo would realize just how difficult it was to be an immigrant alone in America.

Written and produced by Francesca Di Giosa, who draws inspiration from idyllic reminiscence of the past and the romance of everyday life, “Alone in America” is in the FYC (For Your Consideration) 2019 Primetime Emmy Awards for Outstanding Short Form Program, Outstanding Music and Lyrics, Outstanding Vocal Performance and Outstanding Motion Design.

Director, Producer Charles Mandracchia has been involved in numerous films as an animator, composer, actor, writer, and more. His work on “Alone in America” earned him the Best Voice Actor award in the Los Angeles 2019 Actor Awards, Gold Award for Animation in the International New York Film Festival and nominations in several other film festivals for animation.

Tweet
More in this category: « The Tarantella MUST READ: Andrea Camilleri »